The UKâ€™s most senior general said on a BBC interview Sunday that Britain had in place contingency plans for a â€œvery limitedâ€ response in the case of a worsening humanitarian situation in Syria within the next few months. 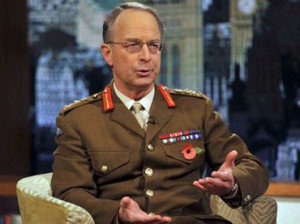 The admission from Chief of the Defense Staff General Sir David Richards is the most serious warning yet that Britain is preparing for some kind of military involvement in Syria.

It seems that British policy has now shifted from trying to support and organize the disparate rebel groups to considering full-blown military action.

â€œThe situation this winter I think may deteriorate and may well provoke calls to intervene in a limited way,â€ General Richards told the BBCâ€™s Andrew Marr Show.

â€œItâ€™s my job, amongst other people in my sort of position, to make sure these options are continually brushed over to make sure we can deliver them,â€ he continued.

Defense Secretary Phillip Hammond, who was interviewed on the BBCâ€™s Sunday Politics program, also confirmed that the UK had not ruled out military intervention â€“ but was still focused on trying to overcome objections from Russia and China to get a strong UN Security Council resolution condemning the Bashar al-Assad government.

â€œAt the moment we donâ€™t have a legal basis for delivering military assistance to the rebels. This is something the Prime Minster keeps asking us to test â€“ the legal position, the practical military position, and we will continue to look at all options.â€ he said.

However, he stressed that Britain’s main focus at the moment was making sure the crisis in Syria doesnâ€™t spill into any neighboring countries like Lebanon, Turkey or Jordan.

General Richards added that there could be British troops posted in countries neighboring Syria.

â€œTheyâ€™re allies of ours â€“ we have small numbers of people routinely deployed there, and in the meanwhile weâ€™re preparing plans to make sure that when some disaster happens, weâ€™re able to deal with it.â€

However, Marcus Papadopoulos, editor of magazine Politics First, told RT that he didnâ€™t think the British announcement should be taken too seriously.

â€œI think itâ€™s more designed to actually invigorate the Syrian militants â€“ who are of course the proxies of the West â€“ and at the same time to try and scare the government of President Assad and try and demoralize the Syrian armed forces, which of course are fighting a very long, protracted, bloody war,â€ he said.

Another option that London is considering includes amending a 2011 European Union trade embargo that would allow weapons to be sent to the rebels, for “humanitarian” reasons.

David Cameron wants to push for an end to the embargo, which does not allow either said to receive military aid from abroad. Cameron also wants to put more pressure on Washington to help the Syrian rebels, and if he is successful, it could see the UK supplying weapons directly to the Syrian resistance.

“Safe havens” for refugees are also being considered, but there are no plans to try and impose no-fly zones over Syria. Without a no-fly zone, a safe haven for refugees would be almost impossible to enforce.

Britain already has troops in Afghanistan, while its overstretched army, navy and air force face increasing budget cuts, so any credible military intervention would need to be in support of a larger US operation, or independently but on a minor scale.

British public opinion would also likely be firmly opposed to any new military intervention. A growing number of British people, including many politicians, want their troops out of Afghanistan as soon as possible.Â  A new military intervention on any scale would be a very hard sell for the coalition, which is already under fire domestically for unpopular austerity measures and a faltering economy. (RT News).