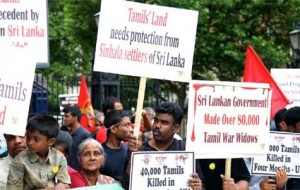 British Tamils gathered at a rally opposite Downing Street in London on Tuesday 23 July to remember the thirtieth anniversary of the Black July anti-Tamil pogrom, in which 3,000 Tamils were killed.

Although not the first pogrom to be unleashed against the Tamils, Black July was a watershed moment in Tamil history. As Tamils across the island were forced to realise that they would never be safe within a Sinhala-dominated state, hundreds of thousands fled the island to find safety on foreign shores. As the dust settled, the history of the Tamil people had begun a new chapter â€“ one of unprecedented suffering and destruction which continues to this day.

British Tamils gathered opposite Downing Street to commemorate the innocent civilians who were killed in 1983, as well as the hundreds of thousands of Tamils who have died since at the hands of the Sinhalese state and mobs. Placards and slogans decried the absence of justice for all these victims of Sri Lanka’s genocide of the Tamils. Banners at the rally also highlighted other tactics that continue to be employed by the Sri Lankan state to gradually destroy the Tamil nation: including the militarisation of the north and east of the island; illegal state grabs of Tamil land; and sexual violence against Tamil men and women. The rally attracted positive attention from passers-by; many had been unaware of the plight of Tamils in Sri Lanka and gave words of encouragement to the crowd.

The demonstrators sought to remind the UK government that life for Tamils on the island has become substantially worse, not better, since the sorrowful events of July 1983 and that thirty years of soft â€œengagementâ€ with the Sri Lankan state has achieved very little.

In this context, the demonstrators expressed their bitter disappointment â€“ felt widely among the British Tamil community â€“ that the UK government has decided to participate in the forthcoming Commonwealth Heads of Government Meeting in Colombo in November 2013 under the pretext of â€œengagementâ€. The chief outcome of this meeting is likely to be a propaganda coup for the Sri Lankan state â€“ a state that is desperately trying to avoid an independent, international inquiry into the crimes committed during the Mullivaikkal Massacre of 2009, in which nearly 147,000 still remain unaccounted for. The demonstrators lent their voices to the growing clamour for the UK to boycott this meeting â€“ a campaign that is wholeheartedly supported by the British Tamils Forum.

The rally ended with a candle-lit minute of silence to remember all those Tamils who have been killed by the Sri Lankan state. As the crowd dispersed peacefully and headed home, those who had attended could be overheard sharing their personal recollections of the horrors of July 1983.