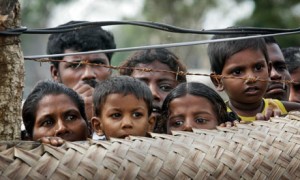 The Tamil Information Centre (TIC) strongly condemns the brutal attack on Tamil political prisoners in the Vavuniya remand prison today, 29 June 2012, at around 12 noon, by a Sri Lankan Special Military Commando unit and the Special Task Force (STF). The attack has left around 40 prisoners and others injured, some of them critically.

The Vavuniya remand prison had 253 inmates which included political prisoners as well as other prisoners. The attack took place following the seizure of three prison guards by the inmates in an effort to create public awareness about their unreasonable detention and inhumane treatment at the hands of prison guards and officials. Many of the political prisoners are held for long periods without recourse to any legal remedy or access to their relatives or legal representatives.

According to eye witness reports received by the TIC, more than 500 Special Military Commandos, STF members and policemen entered the prison at noon and after firing tear gas, mercilessly attacked the prisoners. The commandos and STF members had their faces covered with black masks. We learn that before entering the prison, some of the attackers went to a shop in the vicinity and obtained some 50 thick wooden hoe handles and used them to beat the prisoners. Loud screams were heard in the surrounding areas. Some of the inmates had been stripped and were seen covered in blood. No information is currently available about the women prisoners and those disabled.

At the time of the attack, all roads surrounding the prison were closed and members of the public were prevented from entering the area. The electricity supply to the prison complex had also been disconnected. A number of ambulances and bulldozers were seen parked near the prison. School children nearby were affected by the tear gas and nine of them fainted on the road.

The Vavuniya remand prison was closed after the attack and all the prisoners were moved to the prison in Anuradhapura. The last report received by the TIC indicates that the injured were admitted to the medical unit within the Anuradhapura military camp. However, government officers in Colombo have denied the attack and some have claimed that there was no injury to any prisoner.

The TIC calls on the Sri Lankan government to ensure the safety of the prisoners currently in Anuradhapura and initiate an independent inquiry into the incident. As the detention of many of the political prisoners has no basis in Sri Lankan law, the TIC also urges the government to treat the prisoners in accordance with domestic and international law and release the prisoners or bring charges against them without any further delay.