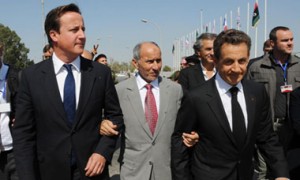 Mr. Harper’s threat – intended to spur changes in Sri Lanka’s dismal human-rights record – was held up Thursday by the British House of Commons’ foreign affairs committee as a positive example for Cameron to emulate.

“It’s a position we agree with. We think that he’s right to qualify it by saying that unless there’s an improvement he won’t attend,” Richard Ottaway, the British Tory MP who chairs the committee, told The Canadian Press from London.

The all-party British parliamentary committee urged Mr. Cameron to follow Mr. Harper’s lead in its report on the future of the 54-country Commonwealth, which is plagued by the dubious human-rights failings of many of its Third World members.

Mr. Ottaway said that, if Mr. Cameron joins Mr. Harper, the threat might actually force the Sri Lankan government to properly investigate atrocities committed by its forces. “I’d like to think if he’s joined by David Cameron, and we say to the Sri Lankans, ‘unless you improve your human-rights performance, we will be boycotting the heads of government meeting,’ that in itself will result in an improved performance by Sri Lanka and it will be possible for prime ministers Harper and Cameron to attend.”

Mr. Cameron has yet to respond to the committee’s recommendation.

The Harper government and human rights groups are calling on Sri Lanka’s government to independently investigate war crimes allegations by both sides, including its own forces against Tamil rebels and civilians in the dying days of the country’s 27-year civil war in 2009.

The long internal conflict, largely ignored by the outside world, pitted the largely ethnic Sinhalese majority government against minority Tamil rebels, the Tamil Tigers, which have been labelled terrorists by Canada and other countries.

Though both sides stand accused of committing atrocities, Mr. Harper has said Canada will boycott the 2013 Commonwealth summit if the Colombo government does not take the war crimes accusations against it more seriously.

A United Nations report this week offered scathing self-criticism of the world body’s inability to protect the estimated 40,000 Tamil civilians who were killed in the government’s final, crushing offensive to end the civil war.

The report said the UN was guilty of a “grave failure” to prevent civilians from being killed.

The report illustrated how UN staff in Sri Lanka repeatedly caved to pressure from Sri Lankan authorities to play down evidence of mass atrocities against civilians. It also said the Sri Lankan government intimidated UN staff in a variety of ways.

This latest round of UN soul-searching comes after Sri Lanka’s own internal inquiry into the end of the civil war largely absolved the government and was criticized internationally as a whitewash.

Earlier this year, Canada co-sponsored a motion at the United Nations Human Rights Council, which calls on the Sri Lankan government to fully examine allegations of summary executions, kidnappings and other atrocities by government forces and the Tamil Tiger rebels.

In a statement Thursday, Foreign Affairs Minister John Baird made no direct mention of the UN’s failings, focusing instead on how the report detailed “a litany of human rights violations” endured by the Sri Lankan people.

“Sadly, the Sri Lankan government continues to fail victims and survivors alike,” Mr. Baird said. “The measures it has taken to date simply do not go far enough, as this report clearly lays out.”

The Harper government reversed its stand on Sri Lanka after winning a majority government in 2011. Prior to that, it was firmly on the government’s side, and opposed to the Tamil cause because it had listed the Tigers as a terrorist organization.

Thousands of Tamils took to the streets of major Canadian cities in 2009 to protest the government’s silence on the atrocities in their homeland.

That woke the Conservatives to fact that Canada is is home to the largest Tamil diaspora in the world. An estimated 300,000 Tamils now reside in Canada, many in the Toronto area.

The Canadian Tamil Congress acknowledged Thursday the lead the government is now taking to press for an independent international investigation into war crimes and crimes against humanity in Sri Lanka.

“We hope the Prime Minister and the government will make the decision not to attend, and to boycott the meeting in its entirely,” said Gary Anandasangaree, the group’s spokesman. (The Canadian Press)