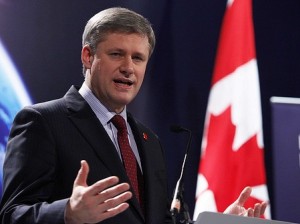 The decision may ostracize Harper as the only G8-level leader not attending the meeting with Britain, Australia and New Zealand all expected to send their prime ministers, but it is expected to be very popular with Tamils, a new community the Tories are going after.

The Conservative government has yet to decide whether it will send a minister, the high commissioner or any staff to the biennial meeting â€” a decision that will highlight how loudly the Government of Canada wants to make a point.

During Question Period this week, Foreign Affairs Minister John Baird said â€œno one is standing up stronger against the regime in Colombo, Sri Lanka, than this prime minister and this government.â€

â€œIf the top guy stays away but someone more junior goes, that conveys a strong but not as complete message as would be conveyed by staying away completely,â€ said Alex Neve, the secretary general of Amnesty International Canada.

â€œOur position is unless we see significant and substantial signs of human rights improvements in Sri Lanka, the meeting simply shouldnâ€™t be happening there.â€

Itâ€™s highly problematic for an institution which purports to support human rights to hold a meeting in a country with deteriorating human rights, he said. The host country of the CHOGM also becomes the chair of the Commonwealth for the next two years â€” which means the consequences of holding the meeting in Sri Lanka will be much deeper than photos ups and two days of meetings, Neve added.