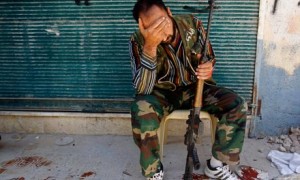 A car bomb a senior Turkish politician blamed on Kurdish separatists exploded near a police station in a city near Turkey’s southeastern border with Syria on Monday, killing at least eight people and wounding dozens more.

TV footage from Gaziantep showed a bus and the surrounding area ablaze and smoke billowing into the sky as firemen tried to fight the fire. Ambulances ferried casualties to hospital while anxious residents looked on.

“Unfortunately we lost eight citizens and nearly 60 people are getting treated at several hospitals according to our initial information,” Erdal Ata, Gaziantep’s governor, told reporters. The explosion, which officials said was caused by a remote-controlled car bomb, is likely to further strain already tense relations between Turkey and its war-torn neighbor Syria.

There was no immediate claim of responsibility but southeastern Turkey is frequently the scene of attacks by the Kurdistan Workers Party (PKK), designated a terrorist group by Turkey, the United States and European Union.

Turkey has accused Syria of supporting the PKK, which launched a separatist insurgency in the region 28 years ago during which more than 40,000 people have been killed. “The PKK … is trying to provoke our citizens by targeting the civilian population directly. Our citizens must remain cool-headed,” Omer Celik, deputy chairman of the ruling AK Party, wrote in his Twitter account. ATTACK FOLLOWS TURKEY AID EFFORTS

Turkish Prime Minister Tayyip Erdogan has tried to limit the impact of the conflict in Syria, where the PKK is exerting growing authority in some border areas. Ankara believes PKK militants are receiving arms from Syrian forces.

The attack came just two days after Turkey began handing out food and other humanitarian aid on the border to refugees fleeing the 17-month-old uprising against Syrian President Bashar al-Assad. Turkey has opened a center in Gaziantep to receive international aid but is struggling to cope with an influx of almost 70,000 refugees. Before the conflict in Syria halted trade across the border, Gaziantep was a gateway into Turkey for many Syrians. Turkey initially cultivated good relations with Assad’s administration but relations have deteriorated sharply since the Syrian uprising began. Erdogan is now one of Assad’s harshest critics and has raised the possibility of military intervention in Syria if the PKK becomes a threat there. Turkey suspects a major Syrian Kurdish movement, the Democratic Union Party (PYD), of having links with the PKK. Turkish analysts believe Assad let the PYD take control of security of some towns in northern Syria to prevent locals from joining the rebel Free Syrian Army (FSA). Fighting between the Turkish army and PKK militants has intensified in recent weeks in Turkey’s southeastern Semdinli district bordering Iran and Iraq. Suspected PKK members ambushed a Turkish military bus in western Turkey earlier this month, an attack outside the group’s regular field of operation in the mainly Kurdish southeast.

Earlier on Monday, two Turkish soldiers were killed by a landmine on a road in southeast Turkey, an attack also believed to have been carried out by PKK militants, security sources said. (AP).