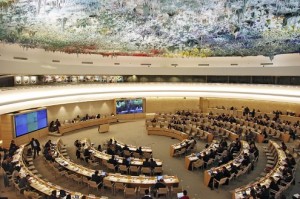 A senior lawyer and writer who served as the Legal and Media Consultant of the Human Rights Commission of Sri Lanka (HRCSL) has filed a case in the United Nations Human Rights Council (UNHRC) in Geneva, against the HRCSL and the local unit of the United Nations Joint Programme on Human Rights (UNJPHR), for violation of his human rights.  The complainant, Mr. H.A. Seneviratne had been the Legal and Media Consultant of the HRCSL on an Agreement signed by him and Mr. Priyantha R.P. Perera, former Judge of the Supreme Court of Sri Lanka, on behalf of the HRCSL. Although the agreement was operative from August 1, 2011 to July 30, 2012, Chairman HRCSL had informed Seneviratne that the UNJPHR, which made the monthly consultancy payment of Rs. 50,000/=, had informed the HRCSL that they would not be in a position to make payments from end of February 2012.

According to the case filed by Seneviratne – as complainant – in the UNHRC, he had continued to serve as Legal and Media Consultant of HRCSL, and made two requests to the Chairman HRCSL that the matter be resolved in a just and fair manner. But there had been no response to these letters.

The complainant has stated in his complaint that the reason for this attitude of the HRCSL in breaching the agreement was the result of the suggestions he had been making to propose to the government to make certain timely and basic changes in the Sri Lanka Human Rights Commission Act and the Constitution of Sri Lanka in order “to help the emergence of a home-grown system to protect human rights of the people of this country without external intervention or criticism.”

He also states that the subsequent calculated appointment, in February 2012, of another consultant – the wife of a senior minister – would have been the inevitable and immediate cause for the breach of the agreement that the HRCSL had already signed with him.
The case filed in the UNHRC further states that the government’s appointment of the Chairman of the Land Reform Commission to the additional post of Additional Secretary (Legal) HRCSL, has further contributed towards the failure of the HRCSL to act independently and impartially.

In the circumstances, the former Legal and Media Consultant of the HRCSL has requested the UNHRC to go into his complaint and take steps to grant him relief and also to make the HRCSL an organization capable of protecting human rights of the people from being violated on an unprecedented and rising scale as it happens today and thereby contribute forwards the restoration of the rule of law in Sri Lanka (IS)