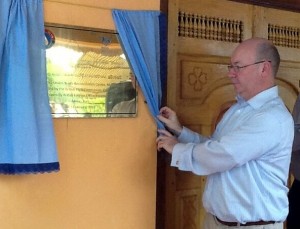 Visiting UK Minister Alistair Burt says he is pleased to see the progress in some areas of the north but yet notes that challenges still remain, the British High Commission in Colombo said.

Burt went to the North of the country today on the first day of his visit to Sri Lanka, holding a range of meetings and opening a youth project designed to facilitate country-wide reconciliation.

The British High Commission said that ahead of this yearâ€™s Commonwealth Heads of Government Meetings (CHOGM), Burt was able to see developments that have occurred in the region since his last visit two years ago, and the work that remains to be done, following thirty years of conflict.

During a visit to the Keppapilavu relocation site, Burt saw the continuing challenges faced daily by those who were displaced by the conflict. He expressed his hope that they would soon be able to return to their homes, or to other suitable areas.

As Guest of Honour at the opening of Sri Lanka Unitesâ€™ reconciliation centre at Mulliayawelai, the Minister saw how the UK is helping to support sustainable peace in Sri Lanka.

â€œI have been pleased to see progress in some areas since the end of the conflict. The destructive force of war â€“ tearing lives, families, societies and countries apart â€“ is only too evident in this part of the country. It is great to see young Sri Lankans leading efforts to heal wounds and to unite Sri Lankans of all backgrounds in the task of reconciliation and recovery. This Sri Lanka Unites reconciliation centre, together with others due to be established in other parts of the country, will help to bridge the divide between the North and the South. Such centres will foster communication and understanding across the island. Sri Lanka Unites is helping to empower young people to build a strong, stable, prosperous and united future. I am delighted to be able to support their efforts.â€

In the North, the Minister also met the Mullaitivu Government Agent, Mr N Vethanayakam, and NGOs working in the area. These included the HALO Trust, a British organisation which is conducting de-mining in the North with Â£3 million of UK Government support.