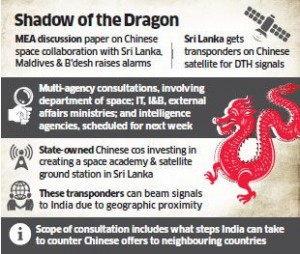 China has sparked off a fresh scare in India’s national security establishment, this time with its little-known collaboration with neighbouring countries’Â  space-related programmes, adding a new dimension to fears among intelligence agencies the eastern neighbour was encircling India strategically with large communication networks. A string ofÂ  satellite deals China has struck with Sri Lanka, potential space-related partnerships in Maldives and Bangladesh and their security implications have raised concern in New Delhi, which has scheduled a key meeting next week.

According to a confidential government note seen by ET, the department of space, ministries such as information technology, information & broadcasting, and external affairs, along with multiple intelligence agencies, will examine the situation next week at the meeting and formulate a plan to match China’s space diplomacy.

China is helping build a space academy and satellite ground station in Sri Lanka. A Sri Lankan firm has struck a deal with Chinese state-owned companies to launch the island nation’s maiden telecom satellite. Maldives and Bangladesh are both in talks with China for building or launching satellites for them, according to a discussion paper by the external affairs ministry.

The external affairs ministry discussion paper forms the backdrop to next week’s meeting. China’s influence in the neighbourhood has been an increasingly thorny issue, with analysts suspecting a Chinese hand behind recent setbacks India has suffered in the region, such as the scrapping of GMR’s airport deal in Maldives and Sri Lanka raising duties on Indian auto imports. China’s economic rise is gradually eroding India’s ability to wield influence in its immediate neighbourhood.

In January, ET reported that India’s intelligence agencies had warned about Chinese companies striking deals in the neighbourhood to build large telecom and IT networks. Chinese lending institutions are bankrolling many of these networks.

State-owned Chinese firms are investing in building a space academy and satellite ground station in Sri Lanka. Sri Lanka’s Supreme SAT is working to launch Sri Lanka’s first telecom satellite in 2015, in partnership with state-owned China Great Wall Industry Corporation (CGWIC), at a cost of $320 million. CGWIC is investing $40 million to build a space academy in Lanka. China has also leased transponders on a local satellite to Sri Lanka, which has been hailed in the island nation as its entry into the space age.

The Maldives defence minister has initiated discussions with China for co-operation in satellite manufacturing and launch. The Sri Lankan company Supreme SAT also claims to be in discussions with the government of Maldives to launch satellites for it on a revenue-share basis, in collaboration with Chinese companies, according to the discussion paper.

Bangladesh is planning to launch a communication satellite called Bangabandhu. Its telecom regulator floated a request for proposals in 2011, and the country’s foreign minister invited the China Great Wall Industry Corporation to submit a proposal.

The meeting next week will examine whether India can offer to build and launch satellites for its neighbours or offer transponders to beam signals. When India reaches a decision on this and embarks on its own space diplomacy, its hand will have been forced by China. It will also serve as a reminder that offering competitive concessions to smaller neighbours in every area might become a diplomatic compulsion. (TOI)