China has launched the first ship in a new class of stealth missile frigates, state media have reported, amid ongoing tensions with neighbouring countries over Beijing’s maritime claims. 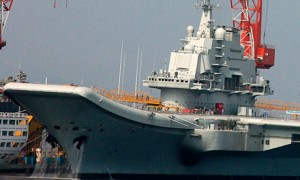 Its navy is building a total of 20 Type 056 Jiangdao class frigates to replace older models and bolster its ability to conduct patrols and escort ships as well as submarines in waters it claims in the South and East China Seas.

The first in the class, No 582, was formally delivered to the navy on Monday in Shanghai, which is home to one of the country’s largest naval shipyard complexes, according to the official Xinhua news agency and the navy’s official website.

Navy commander Wu Shengli attended the delivery ceremony, the reports said, an indication of the importance with which the service regards the new ships’ mission.

The helicopter-equipped ships feature a sleek design to reduce clutter and make them harder to spot by radar and are armed with anti-ship and anti-aircraft missiles. They also need a crew of just 60, two-thirds fewer than older vessels, a major advantage that should boost efficiency and relieve burdens in training and recruitment. At 1,440 tons fully loaded, each is considerably smaller than US navy frigates, and is categorised by some observers as a member of the smaller class of ship known as corvettes.

China’s navy has so far stayed aloof from the island disputes in order to avoid further escalating tensions, with patrol ships from the ministry of transportation and other government agencies dispatched instead to assert China’s territorial claims.

However, China has made no secret of its desire to extend its navy’s global reach, and the service has received considerable attention in China’s military modernisation. China’s first aircraft carrier, the overhauled Soviet-era Liaoning, entered service last year, while a growing array of nuclear submarines and ultra-modern surface ships are also joining the fleet. (The Guardian)