A Chinese frigate has locked weapon-targeting radar on a Japanese guard vessel in the area of the Senkaku Islands in the East China Sea, said Japanâ€™s Defense Ministry. The islands are the subject of a territorial row between Beijing and Tokyo.

The incident occurred at the end of January, but took time to confirm. Japan’s Foreign Ministry sent a formal protest to China on Tuesday in connection with the incident.

“Directing such radar is very abnormal. We recognize it would create a very dangerous situation if a single misstep occurred,” Japanese Defense Minister Itsunori Onodera told the media.

The meeting of the two ships happened during a routine appearance of a group of Chinese patrol in the area of the disputed islands, known as the Diaoyu to the Chinese. In such cases Japanese frontier guards escort Chinese vessels and transmit radio demands to leave the territorial waters of Japan, but do not take any active measures, according to the ministry.

Prime Minister Shinzo Abe told Onodera it was important to respond calmly and not meet provocation with provocation, according to Kyodo news agency.

In the past six months, Chinese frigates have been constantly in the waters of the disputed islands and from time to time make brief demonstrative approaches to coastal waters. The territorial row has escalated into saber-rattling on both sides. The Japanese military scrambled fighter jets over the incursions, and then vowed to shoot down intruders. Neither China nor Japan has dispatched ships or planes to occupy the islands and claim ownership.

Amid fears that tensions over the disputed islands between aircrafts or ships of the two states could cause an accidental clash, a leadersâ€™ summit could be held in April, according to Japanese authorities. 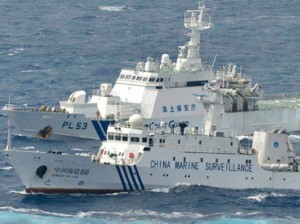 The dispute over the islands and the maritime boundaries around them has continued for years. It escalated in recent months, when Tokyo announced the purchase of three of the islands from a private Japanese owner in September of last year. After that, China witnessed mass anti-Japanese demonstrations. A diplomatic scandal led to problems in bilateral economic relations. Several Japanese companies in China suspended their work for security reasons, and Chinese Customsâ€™ clearance of goods slowed from Japan.

Historically, the islands belonged to China for centuries, but Japan assumed control of the territory following the 1894 Sino-Japanese War. Taiwan has also claimed ownership of the islands. (RT News)