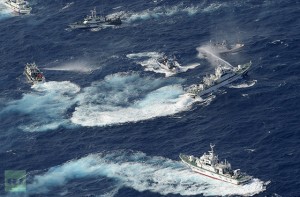 For the first time, the Indian Navy has strong indications that a fleet of Chinese nuclear submarines is making frequent forays into the Indian Ocean.

22 such Chinese operations have been recorded, one as recently as February, 2013. One submarine was spotted near the Andaman and Nicobar Islands.

Headlines Today has exclusive access to a report from the Indian Navy to the Defence Ministry that says 22 unknown submarine contacts were detected by Indian and U.S sonar in the Indian Ocean.

The assessment is that China is the only other navy capable of operating in the area. The assessment has been confirmed by U.S. and Indian intelligence inputs.

The extent of Chinese submarinesâ€™ unchallenged forays into the Indian Ocean can be deeply troubling for the Indian Navy.

Sources tell Headlines Today that one contact with a suspected Chinese submarine took place just 90 km from Indian soil in the Andaman and Nicobar Islands.

Six contacts took place north-west of the Straits of Malacca, 13 south of Sri Lanka and two as far as the Arabian Sea.

The first such Chinese submarine was spotted on sonar in August 2012 during a patrol of Indian and U.S. navy ships, confident that they are the only two navies operating in the southern part of the Indian Ocean.

According to the report, the Peopleâ€™s Liberation Armyâ€™s naval wing is deploying the state-of-the art nuclear submarines on a 10,000-mile deepwater run. The launch location is Sanya in the South China Sea.

Official sources say the Chinese submariners could be preparing to sneak into Indiaâ€™s backyard, test Indian Navyâ€™s conviction in keeping them out and probably pioneer a permanent presence in the Indian Ocean region. (India Today)