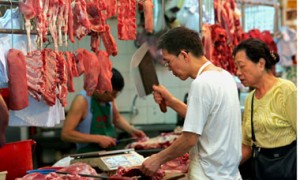 You might have thought that China had long ago struck rock bottom in food safety, after a string of scandals involving glow-in-the-dark pork, exploding watermelons, fake eggs and melamine milk. But you would be wrong.

Police in China have arrested 904 people for “meat-related offences” over the past three months, China’s public security bureau announced on Thursday. Some of the scams revealed were as ingenious as they were terrifying: one Shanghai-area gang made more than Â£1m by passing off fox, mink and rat meat as mutton.

The scale of the scandal dwarfs the recent horsemeat scare in Europe: in total, authorities seized 20,000 tonnes of illegal products and uncovered 382 cases of meat-related crime, according to a statement on the ministry’s website â€“ primarily the sale of toxic, diseased and counterfeit meat.

A total of 63 people were arrested and 10 tonnes of meat and additives were seized in a raid in Shanghai in February. The gang, led by a suspect named only as Wei, treated meat from rats and other animals with gelatin, nitrate and carmine (a colour produced from ground beetles), then sold it as mutton at farmers’ markets in Jiangsu province and Shanghai.

A separate group of suspects in Baotou city produced fake beef and lamb jerky from duck meat and sold it to markets in 15 provinces. Levels of E coli in the counterfeit product “seriously exceeded standards”, the ministry said.

Another suspect, from Fengxiang city, Shaanxi province, last year sold mutton that had turned black and reeked of agricultural chemicals to a barbecue restaurant, killing one customer and poisoning others.

In Fujian province, five suspects were arrested and two factories shut for butchering disease-ridden pig carcasses and selling their meat in nearby provinces. The suspects had been hired by the agriculture ministry to collect the carcasses from farmers and dispose of them properly.

Authorities closed two factories in the southwestern province of Guizhou for soaking chicken feet in hydrogen peroxide to make them appear whiter before shipping them to markets. And in Zhenjiang city, Jiangsu province, two people were arrested for selling pork products made with meat from “poor quality pig heads”.

China’s meat markets are already reeling from several food safety scares. Chinese consumers eat four times as much meat today as they did 20 years ago but pork sales collapsed in March after about 16,000 pig carcasses were dredged from a river in Shanghai, an incident authorities have yet to fully explain. A virulent strain of avian flu has killed 26 people and put more than 129 in hospital since mid-April, wreaking havoc on the domestic poultry industry.

Domestic pork prices are at their lowest level since January 2011, said Joel Haggard, the US meat export federation’s senior vice president for the Asia-Pacific region.

“We hear of restaurants and consumers shifting to more aquatic products and beef and mutton,” he said, yet even these have taken a hit. “Beef imports during the first quarter of 2013 reached a record 53,276 tonnes, nearly 800% larger than the amount imported during the same period last year, which was a record at that time.”

China’s food safety authorities are now turning their attention to dairy products, according to the Xinhua state news agency. In 2008, more than 54,000 infants became ill and six died after being fed milk and baby formula tainted with the industrial chemical melamine.

The country’s top court on Friday announced new guidelines calling for harsher penalties for those found guilty of producing or selling unsafe food products. The supreme people’s court said the guidelines would list as crimes acts such as the sale of food excessively treated with chemicals or made from animals that have died from disease or unknown causes.

The announcements appear to be part of a multifaceted gesture by the authorities to assure people that they are doing their best to ensure food safety.

Yet users of Chinese microblogging platform Sina Weibo have received the gesture with frustration, pointing out that despite periodic crackdowns, the status quo has remained unchanged for years. Some users demanded strict punishments and systemic change; others said the country’s food safety watchdog was as inept and corrupt as its greatest offenders.

“Apart from black-hearted businessmen, some government departments may be inept â€“ even colluding with them,” wrote one user. “Without the supervision of common people and stricter punishments, this type of thing will be hard to get rid of.

“If Chairman Mao were still here, these people would be dragged outside and shot,” wrote another. “Even their family members should hang their heads in shame.”

Police in Zhejiang posted a microblog including instructions on how to differentiate between real and fake mutton, after fox, mink and rat were sold as thinly sliced rolls for consumption in hotpots. “Most people can’t tell the difference,” said the post. (The Guardian)