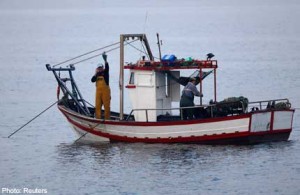 A Chinese company has been granted permission to engage in fishing under the Sri Lankan flag beyond the Exclusive Economic Zone (EEZ) of Sri Lanka. The company has entered into an agreement with the Board of Investment to carry out fishing in the international waters, according to an official of the Ministry of Investment Promotion.

Under the agreement 90 per cent of the catch would be exported to China and 10 per cent given to the Ceylon Fisheries Corporation (CFC) at one US dollar a kilogram, he said. The Chinese vessels would berth in the recently opened Dickowita Fisheries harbour where the processing for exports would be carried out, the official said.

The operation is expected to generate US dollars 11 million (Rs. 1.3 billion) in the first year. According to the official, the company is planning to start operations with four vessels this month and thereafter deploy 16 more 150 ft vessels.

The four vessels to be deployed are now south of Sri Lanka.