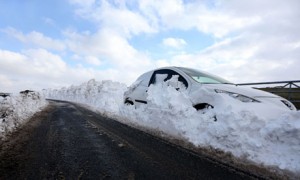 Fears that Britain is heading for an unprecedented triple-dip recession have intensified as economists warned that the severe weather gripping much of Britain threatened a second successive quarter of falling national output.

Just days after the chancellor predicted that the UK would narrowly avoid a second successive quarter of negative growth â€“ the official definition of recession â€“ experts warned that the combination of heavy snow and sub-zero temperatures might be a crucial factor in whether the economy expanded in the first three months of 2013.

Osborne has been hoping that a pick-up in the housing market and stronger consumer spending will be enough to eke out growth of 0.1% in the three months to March, avoiding “triple dip” headlines when the official figures are released late next month.

But amid reports of empty shopping malls, closed schools and factory shutdowns, analysts said the weather increased the chance that the fall in activity in the final three months of 2012 would be followed by another quarter of falling gross domestic product in early 2013 â€“ thus satisfying the official definition of a recession.

Economists said the cold snap would affect takings at pubs and restaurants, while parents would have had to take time off work to look after their children when the schools were closed. Manufacturing firms were likely to be affected by disrupted supply chains.

Samuel Tombs, of Capital Economics, said that the disruption was likely to be smaller than in December 2010, when blizzards contributed to a 0.5% drop in quarterly output. “Nonetheless, given that most economic indicators suggest that the economy was barely growing at all before the latest bad weather struck, the snow could well be enough to cause GDP to fall for a second consecutive quarter.”

He added that experience showed that spending in the high street would be around 1% lower this month as a result of the temperature in March being 3C below the average for the time of year.Â  The construction industry would also be affected, while blocked roads and cancelled trains would make it harder for people to get to work.

In the past, much of the output lost as a result of bad weather has been recouped in later months. But Tombs said news of a triple-dip downturn would “probably still depress consumer confidence and lead to more calls for the government to reassess its austere spending plans”.

The City is already braced for a weak growth figure following the halving to just 0.6% of the government’s growth forecast for 2013. Britain is currently experiencing the slowest recovery in the past 100 years, following the deep downturn of 2008-09 and a second, shallower recession in 2011-12. There has been no triple-dip recession since modern records began.

Growth in the first quarter of 2013 has already been disrupted by poor weather in January, although the strong data for retail sales in February suggests that parts of the economy quickly bounced back. Analysts said, however, that the timing of the latest weather disruption made it impossible for the reduction in output to be recouped in the current quarter.

Howard Archer, chief UK economist at IHS Global Insight, said: “Bad weather is always unwelcome news for the UK economy, and the latest bout is particularly bad timing as it is battling to avoid further contraction in the first quarter of 2013 and dodge a triple-dip recession. Just how much the economy is affected by the latest snow will obviously depend on how widespread it ends up being and how long difficult travelling conditions last.

“But the worry is with it looking touch and go whether the economy can avoid further contraction in the first quarter and hence formally suffer triple-dip recession, even a slight hit to activity from the bad weather could be the deciding factor that tips the balance towards a further drop in GDP.” (The Guardian)