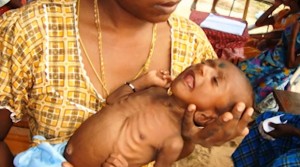 The Indian Congress party has used a picture of aÂ Tamil child in itâ€™s advertising campaign for the assembly elections in Gujarat, the Hindustan Times reported. The report said that the BJP in India has lashed out at congress for using the picture of the malnourished child to highlight malnutrition in the state of Gujarat where the BJP is in power. It has been alleged that the picture was lifted from a Christian organisation which depicted a malnourished child from Sri Lanka. According to the details, the skinny and malnourished child was a victim of floods in Sri Lanka and a Christian organisation, Amyand Park Chapel, had posted this picture on its website www.amyand.com from where the Congress allegedly lifted the picture to be used in its advertisement campaign â€œJoin Hands for Change.â€ As soon as the local media reported it, the ruling party BJP quickly siezed on the opportunity to corner the opposition party saying, â€œThe opposition party is indulging in spreading lies about the Narendra Modi government in the state.â€ â€œItâ€™s a lie that has been exposed. The ad issued by the Congress has hurt the sentiments of the people of the state,â€ Gujarat BJP leader Bharat Pandya said. However, the opposition party defended its ad saying that picture was meant for symbolic value. â€œAs per the government figures, around 45% children in Gujarat are malnourished and our advertisement highlights this ugly reality of Gujarat which bellies the tall claims of development by chief minister Narendra Modi,â€ Gujarat Congress spokesperson Manish Doshi said, according to the Hindustan Times news report.]]>