PIRATED Hollywood blockbusters and Nigerian melodramas are usually the big sellers for Monrovia’s band of roving DVD-hawkers. But this week discerning customers in Liberia’s capital are on the lookout for “The Ambassador”, a rather peculiar Danish documentary. The country’s president, Ellen Johnson Sirleaf, will be hoping it never appears. 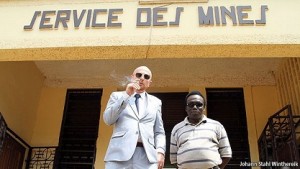 The film follows journalist Mads Brügger on his surreal adventures posing as a corrupt Liberian diplomat in the Central African Republic, where he sets about opening a match factory for a group of pygmies. This absurd enterprise is a cover for his main scheme: to smuggle diamonds out of the country.

What has sent the Liberian press into a frenzy is that the charlatan depicted handing out stuffed “envelopes of happiness”, dancing with inebriated pygmies, and visiting militia-run diamond mines, was in fact an official diplomatic representative of Liberia. A Dutch “diplomatic broker”, Liberia’s top corporate lawyer (who is also chairman of the ruling Unity Party), and around $185,000, facilitated Mr Brügger’s appointment as Liberian Honorary Consul and Ambassador-at-Large. His credentials were signed by President Johnson Sirleaf herself.

Liberia’s government, which has been trying to coax back investors while maintaining donor support, is not amused. The ministry of information expressed “grave consternation”, and promised to sue the “admitted fraudster”. Mrs Johnson Sirleaf vowed to seek extradition, although it is unclear what the charges would be.

Mr Brügger probably needn’t lose any sleep. His most serious crime appears to have been to make the government look silly. But the episode is an interesting illustration of a country stuck between a dark past and a bright future.

A former Liberian president, Charles Taylor, who was convicted of war crimes at the Special Court for Sierra Leone at The Hague in April, used to dish out diplomatic passports to a motley assortment of gun-runners, and timber- and diamond-racketeers.  In the 1990s foreign-service officials auctioned off whole embassies in foreign capitals. In prior years, state plunder was more methodical: the administration of William Tolbert, Liberia’s president from 1971 to 1980, kept records of every weird and wonderful official title it sold.

But Liberia is trying to escape its past.  Many of those, like Mrs Johnson Sirleaf, who were prominent figures in the old Liberia, are now trying to convince the world it no longer exists.  What Mr Brügger’s film shows is what everyone in Liberia already knows: the roots of the old ways exist everywhere; the challenge is keeping them at bay.

President Johnson Sirleaf’s relative success in doing so has led some in the international press to dub her “The Iron Lady”. Actually, she is the arch compromiser, seeking to balance the often competing interests of the Liberians who vote for her, the international community that funds her, and the traditional elites who have long controlled Liberian politics. This is proving increasingly difficult. Her critics argue that despite her liberal rhetoric, she has held no public officials to account, refuses to endorse gay rights or abolish the death penalty, and keeps her sons in senior positions in the country’s National Oil Company, Central Bank, and National Security Agency.

Challenges clearly lie ahead, but the furore over “The Ambassador” does offer cause for cheer. Even with his limitless funds, Mr Brügger endures a tortuous struggle to get his hands on diplomatic credentials. The comically corrupt Central African Republic depicted seems a world away from the country of his new passport.  What’s more, a free press has lampooned senior Liberian politicians for their involvement in the farce. For Liberia, this is not a disaster, it’s progress. (Economist).