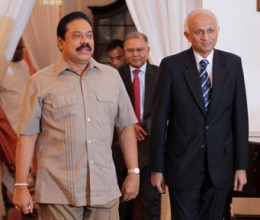 In the light of Indiaâ€™s announcement that it could continue to train Sri Lankan military in the country, key UPA constituent DMK today said there was a â€˜doubtâ€™ if India was â€˜compromisingâ€™ on some issues vis-a-vis Sri Lankan Tamils issue to show itself as a â€˜neutralâ€™ country. In a letter to partymen, the 88 year-old leader said that since 1956, his party had been consistently voicing support for Lankan Tamils, irrespective of being in power or not. â€œWhile the Centre has assured obliging various demands put forth by us, there is a doubt in some if India is compromising on some issues to show itself as a neutral country among others,â€ he said. For instance, he said it was the partyâ€™s stand that India should not train Sri Lankan military personnel in any part of the country but the central government could not â€œcategoricallyâ€ state the same. Referring to the January 23 statement made by Defence Minister A K Antony, Karunanidhi said the former had noted that while keeping Lankan defence men away from Tamil Nadu they will still be trained elsewhere in the country. â€œThere are military institutions in many parts of India and outside Tamil Nadu also. On one side, we will respect sentiments of Tamil Nadu and we will avoid that area. At the same time, in other institutions, we will complete the training (of Sri Lankans) as per our commitment,â€ Antony had said. The DMK chief recalled that Antony had also rejected visiting Sri Lankan Foreign Minister G L Peirisâ€™ contention that Tamil Nadu politicians were cynical in raising objections to training of its military personnel saying sentiments of the people of the state have to be respected. Antony had also said relief and rehabilitation in the neighbouring country was not going on expected speed, Karunanidhi noted. To highlight the plight of Lankan Tamils, 14 resolutions were adopted in last yearâ€™s Tamil TESO conference here which have been handed over to the UN, he said, adding, he had also taken up Tamilsâ€™ cause with Prime Minister Manmohan Singh who, he said, had recognised the need to accord priority for Tamilsâ€™ betterment. Holding that he was â€œconfidentâ€ that the March 2013 session of the Human Rights Council in UN will discuss the Tamils issue in detail, he aked India to take a â€œstrong standâ€ in support of Lankan Tamils there. (Deccan Chronicle)]]>