Egyptian military attack helicopters have fired missiles on suspected Islamic militants in Sinai after attacks on security checkpoints, according to residents and officials. An army source said 20 “terrorists” had been killed in the assault.

Security officials say it is the first time the army has fired missiles in Sinai since the 1973 war with Israel to recapture the Sinai Peninsula. 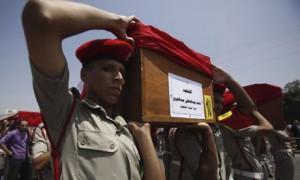 Egyptian forces launched the missile attack a few hours after three security checkpoints were attacked by suspected Islamic militants in North Sinai’s main city of el-Arish, about 30 miles from the Gaza-Israel border.

Officials say six people were wounded in the checkpoint attacks including a military officer, two soldiers, two policemen and a civilian whose condition was described as critical.

Israel welcomed the Egyptian military action. “What we see in Egypt is a strong fury, a determination of the regime and the army to take care of it and impose order in Sinai because that is their responsibility,” senior defence official Amos Gilad told Israel Radio.

“This is an Egyptian action that is being handled by the Egyptians on the basis of the information they have. If they don’t remove and uproot [the threat], it will continue to strike.”

Brig-Gen Shmuel Zakai, the former Gaza Division commander, said that the Egyptian determination was surprising. “This is an unprecedented Egyptian operation,” he told Israel Army Radio. “In fact the Egyptians since the Yom Kippur War have not deployed forces of this size in Sinai. It definitely won’t be short and it won’t be simple. We are talking about terrorist infrastructures that have based themselves in the area with the support of the population and with weapons.”

The military action followed an attack on Sunday, in which militants killed 16 Egyptian border guards before breaching the border and penetrating almost 2km inside Israel. After the armoured vehicle commandeered by the militants was blown up in an Israeli missile strike, the militants’ bodies were found to be wearing suicide belts.

Egypt, which has claimed Palestinian militants from Gaza were partly behind the attack, has closed the Rafah border “until further notice”, leaving Gaza largely cut off from the outside world. It has also begun sealing the tunnels underneath the border between Egypt and Gaza, which have been used for the past five years to smuggle people, consumer goods, construction materials and weapons.

Hamas, which condemned Sunday’s attack, has also closed the Gaza end of the tunnels. Long queues have begun forming at petrol stations in Gaza. The vast majority of fuel used by Gazans for cars and generators is smuggled and costs around half the price of fuel imported legally from Israel.

Hamas is anxious to distance itself from the attack and also to co-operate with the Egyptian government. Hamas has close ties to the Egyptian Muslim Brotherhood, whose candidate Mohammed Morsi was elected as president in June. Morsi said he intended to take steps to help the people of Gaza and ease its isolation.

The 16 border guards killed in Sunday’s attack were buried in Cairo on Tuesday amid angry scenes. Morsi did not attend the funeral after reportedly being advised he could become the focus of mourners’ wrath.

The Egyptian government is under intense pressure from Israel and the US to crack down on militant activity in the Sinai. The area has become more chaotic and violent in the 18 months since the Egyptian revolution. Morsi pledged to take swift and effective action to regain control of the Sinai following Sunday’s attack.

One resident said he saw attack helicopters firing missiles about 18 miles east of el-Arish in the area known as Sheikh Zuwayed near the Rafah border crossing with Gaza.