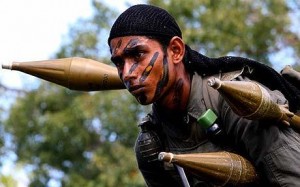 Sri Lankan paramilitary group member and Mayor of Jaffna, Yogeswari Patkunaraja has urged the Tamil student community in Jaffna to treat the security forces personnel as their kith and kin.

She was speaking at an event where students from Jaffna, was held at the Sri Lankan military Civil Affairs and Public Relations office on Wednesday, for the second consecutive year.

Patkunaraja, who was a EPDP member before becoming the Mayor of Jaffna, said the LTTE had misled the Tamils and developed enmity with the Sinhalese people. There was a time the Tamils in the North and East viewed the security forces as their enemies.

Sri Lankan government paramilitary group EPDP is responsible for numerous arrests, rapes and murders of the girls and boys in Jaffna during the war.