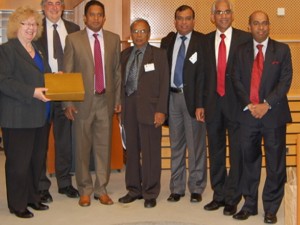 A European Union (EU) Parliamentary delegation has proposed a visit to Sri Lanka this year, the Embassy of Sri Lanka to Belgium, Luxembourg and the EU said.

During their five-days official visit from the delegation held a wide range of discussions with the elected members of the European Parliament and officials of other key EU institutions.

The Sri Lanka Parliamentary delegation on Monday 27th May, had a meetingÂ  with Miichele Coninsx, theÂ  President of the EUROJUST, an institution based in The Hague. It comprises legal experts including prosecutors, magistrates, police officers from the national legal authorities of each of the 27 EU Countries, and is extending judicial cooperation among the Member States in combating trans-border crimes including countering terrorism.

During their visit to Luxembourg on the 30th May, the delegation learnt about the work of the judicial arm of the European Union- the European Court of Justice (ECJ), and its contribution in redressing legal disputes and grievances arising out of the decisions of the European Union and its legislations. They paid a courtesy call on Hon. Koen Lenaerts, Vice-President and the Deputy Chief Justice of the ECJ. They also had an engagement with the European Investment Bank officials discussing matters of mutual interest in the field of investment and finances.