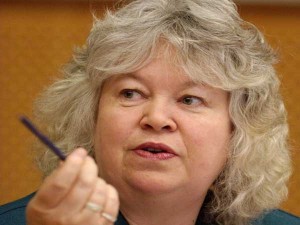 The European Union (EU) today called for the implementation of the 13th Amendment to the constitution.

Jean Lambert, Chair of the European Parliament Delegation for Relations with the Countries of South Asia, also said that the EU is concerned over the army involvement in civilian activities in the North.Â Lambert said she hopes the elections in the North will be free and fair.

â€œIt is important too (elections) because it reflects the statements made by the Lessons Learnt and Reconciliation Commission and the Government of Sri Lanka with regard to implementing the 13th Amendment. The Northern provincial council election represents the fulfillment of those promises,â€ Lambert observed.

She said that on the political front there is still a lot Sri Lanka need to do and she also noted that land issues in the north, disappearances and accountability must be addressed.

The visit by the EU delegation comes as provincial council polls are scheduled to be held in the North in September.

The EU, had earlier this year, said it wants an independent investigation and evaluation into the final years of the war in Sri Lanka, in addition to the national inquiries.

The EU had said it remains concerned about reports of threats and attacks on human rights defenders and journalists in Sri Lanka, and encouraged authorities to hold those responsible accountable.

The European Parliament had also passed a resolution ahead of the UN Human Rights Council session in March, re-emphasising the need for accountability and reconciliation in Sri Lanka.