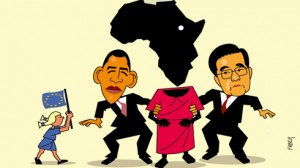 The balance of power is reflected in the little details… like the absence of a Zambian minister at the [Dutch] Queen’s Day celebrations or the American Independence Day in Lusaka. Brazilian, Indian or Chinese investment negotiators now hold court at the minister’s offices. Clearly, the white man no longer matters to Africa

The pride of â€˜African Lionsâ€™, as the growing economies are called by analogy with the Asian Tigers of the 1990s, is expanding its hunting ground to Nigeria, Kenya, Ghana, Zambia, Angola, Uganda, Rwanda and Ethiopia. With ten years of economic growth under their belts their capital cities now boast skyscrapers, sushi bars and iPhones.

Although the white man is still there, as a diplomat, aid worker or development worker, he no longer plays an important role. In the 1970s, some 70 per cent of all funds flowing from North to South were in the form of aid. These days the figure is 13 percent.

Companies regard Africa as scary and unpredictable

The proportional reduction in aid has not been accompanied by increased trade and investments by Western companies. Over a 30 year period, Western Europe’s share in all international trade with Africa decreased from 51 to 28 per cent. Although it is true that a number of Western multinationals, such as Heineken and Unilever, are investing in Africa, they are simply carrying on work they started there many years ago. The vast majority of Western companies have no Africa strategy. They regard Africa as scary and unpredictable.

The greatest change in Africa was initiated by a party that had no intention of doing so. China takes copper, tin, bauxite, iron ore, coltan and hardwood out of Africa and builds roads, bridges, railways, airports and football stadiums in return. The airports and football stadiums are gifts to African leaders. The infrastructure is then used to transport the raw materials to the East.

The white man views China as a vulture capitalist

The Asian superpower is not driven by good intentions. The white man watches mournfully, while his inability to act is transformed into moral disapproval. China is a vulture capitalist picking at the African carcass. Such a view is greeted with mocking laughter by the African elite, who are gaining self-esteem thanks to new-found wealth. “Isn’t that what you Westerners did for a century or so?â€

Has the white man any choice other than to leave Africa with his tail between his legs? Indeed he does. He should rethink his role and review his relationship with Africa. First of all, he has to distance himself from the superiority and the paternalism with which he swaggered through Africa for 150 years. One of the main reasons why Africans are happy to see the Chinese is the business-like (read: equality based) attitude that the Chinese represent.

Islamic Maghreb is not a great prospect

The West should clarify what exactly it is looking for in Africa. There are at least three reasons for devising a new Africa policy: geopolitics, economics and humanitarianism.

It may have taken a while but France, with England and America in its wake, has now realised that an Islamic Maghreb is not a great prospect. Neither the United States nor China are going to lead the fight against Islamic radicals and thieving gangs. Europe has a geopolitical interest in a stable Africa.

The second reason for a new Africa policy is economic. In a century in which they are becoming scarce, Africa is the guardian of some of the world’s largest stocks of natural resources. China has access to raw materials, and Brazil and India also get their share. The white man is absent, however, impeded by his colonial past.

There are two parts to the economic motive. Africa not only has raw materials, it is a rapidly growing market for European industry. Corporate advisors McKinsey and KPMG have both reported that the profit on investments in sub-Saharan areas is second to none.

Westerners must free themselves from their past

The third reason for an Africa policy is familiar territory, namely compassion for people trapped in desperate poverty. Africaâ€™s growth patterns are different to those of Western countries. The so-called trickle down effect of wealth has, as yet, failed to materialise. In fact, poverty is rising in the growth economies of Angola and Mozambique. Moreover, economies often fail to diversify, which makes the Lions vulnerable to decreases in the price of raw materials.

Conflicts, the consequence of increasing inequality and famine exacerbated by climate change, will ensure that the number of humanitarian disasters remains high.

The white man has to learn the art of Chinese Realpolitik and then design his own, creditable â€˜Africapolitikâ€™. To do so,Â  Westerners must free themselves from the shackles of their past and overcome their fear of being called â€˜neocolonialâ€™ when competing for raw materials. They should immediately set aside delusions of superiority and approach Africa on an equal footing.

France has rightly taken up the fight with Islamic rebels in Mali, all the more so, because, in line with the dictates of Realpolitik, its initiative has been motivated by the prospect of rich pickings in the form of uranium and agricultural land. Westerners should no longer ignore the fact that well-organised aid earns huge brownie points for Dutch businesses, which are now also being allowed to build African roads, provided that the Netherlands is willing to foot the bill. This may well bring a Zambian minister back to the Queen’s Day festivities.