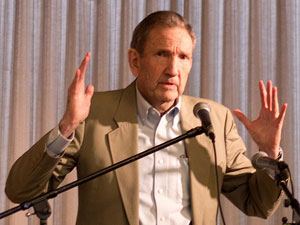 A press statement by the TGTE said that Clarke will be part of a â€œsenateâ€ named in the self appointed parliament of the TGTE.

Both the parliament and senate of the TGTE are however not recognized by the UN or any other international body or government.

Another appointment to the Senate is a Sinhalese, Dr. Brain Seneviratne, who is currently living in Australia, the TGTE said.

The TGTE said that the other members of the â€œsenateâ€ include Dr. Nagalingam Jeyalingam, M.D. from New York, Satya Sivaraman, a Journalist and human rights & public health activist from New Delhi, India, Mrs. Usha Sriskandarajah, a well-known Tamil activist from Canada, Elansezhian B.Sc. from Tamil Nadu, India, Gnaneswaran, an Engineer from Canada, Jegan N. Mohan, a Senior Barrister-at-Law from Canada and Rajaratnam B.Sc. from Canada.

The Transnational Government of Tamil Eelam was created in the aftermath of the end of the war in Sri Lanka. The TGTE held elections in twelve countries to elect Members to its self appointed â€œParliamentâ€ and the members drafted and ratified a constitution and elected a prime minister, a 10 member cabinet and a speaker.