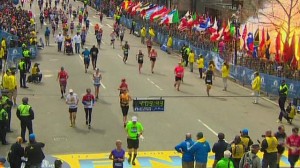 At least three people have been killed and more than 100 injured, some seriously, in two explosions at the finish line of the Boston Marathon, BBC reports.

TV footage showed bloodied runners and spectators being treated at the scene and the road strewn with debris.

The FBI said that this was a “potential terrorist investigation”.

In a TV address, President Barack Obama said “we will find out who did this” and that those responsible would feel the “full weight of justice”.

“We don’t yet have all the answers,” he said. “We still do not know who did this or why.”

He said the government would increase security around the US “as necessary” but did not say whether the White House thought the incident was part of a larger plot.

At an initial news conference, Boston Police Commissioner Edward Davis said authorities had received “no specific intelligence that anything was going to happen”.

He urged people to stay indoors and not congregate in large groups.

At a second conference he said the death toll now stood at three. He said that no suspects were in custody.

Governor Patrick, speaking at the same news conference, confirmed reports that more than 100 people had been injured, some gravely.

He said Boston would be “open” on Tuesday but that there would be “a heightened law enforcement presence”.

“There will be random checks of backpacks and other parcels. We are also asking that everyone be on a state of heightened vigilance,” he said.

Details of the victims have not been revealed, however the Associated Press news agency reported that an eight-year-old boy was among the dead. Quoting a family friend, the report said the boy’s mother and sister were also injured as they waited for his father to finish the race.