Chennai, the next station was about two hours away and people were fast asleep, when  Coach S-11 of the Tamil Nadu Express caught fire early this morning near Nellore in Andhra Pradesh; 28 people have been confirmed dead and another 27 are being treated in hospital. 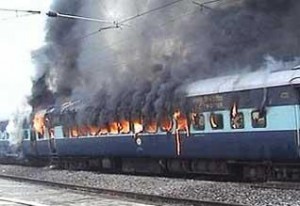 Of the 28 bodies taken out of the coach so far, four bodies have been identified. The injured have been taken to the Nellore civic hospital, where several are said to be battling severe burn injuries.

There is not much left inside Coach S-11 except for metal frames. The bodies of those who died are charred beyond recognition and identification is a difficult process. The coach seats 72 and it was full. Railway authorities are checking names of survivors to identify those who lost their lives. They have also  asked families to send photographs and other details to conform identities. Post-mortem of bodies will take place at the Nellore station today.

One of the survivors of the ill-fated train, which later reached Chennai, said that the rescue team came fast as the accident happened. “But there should be fire extinguishers in each bogie to prevent such fire accidents in the future,” he added.

There were 17 people in the coach from Delhi, 11 from Bhopal, 11 from Warangal and 28 from Vijayawada. Twenty six passengers were rescued from the coach which was completely gutted, Nellore District Collector B Sridhar said.

A special train has been run from Chennai for the relatives of victims and those injured. 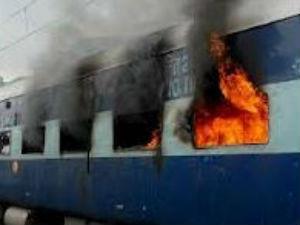 The fire started due to a short circuit near a toilet of the coach at about 4:28 am. People were asleep and took time to react. Many fell unconscious and were then burnt to death. Among those who did was a mother, who in death, still clutched her little baby.

The train had no scheduled stop at Nellore. It was passing through when the deputy station master spotted the fire. The train was stopped and passengers were evacuated immediately. The fires was doused and the burnt coach was detached from the rest of the train.  “The train was moving at a speed of 110 km per hour. It was going to Chennai from Delhi. All the passengers were asleep when the fire broke out. People were not able to come out immediately,” Mr Sridhar said.

S-11 is a sleeper coach with a middle berth on each side of a compartment and the authorities say that would have made it more difficult for people to climb out and into safety. There are also some reports that doors of the coach were found jammed. Passengers were seen throwing water from toilets in an attempt to douse the fire, raising questions on whether they had access to any fire safety equipment in the coach.

The Nellore Collector said, “The fire spread fast and the passengers could not come out through one of the doors because of the fire. So the other edge of the coach was to be used. Some people could come out and others succumbed,” the Collector said.

An eyewitness traveling in the next coach, S-10, says he woke up to people running into his coach at around 4.30 am. “They were trying to pull the chain,” he said. The fire brigade, he said, arrived in about 20 minutes. Another passenger traveling on the train said it took about an hour to douse the flames.

Railway Minister Mukul Roy has announced an ex-gratia payment of Rs. five lakh each to next of kin of deceased. He is expected to reach Nellore soon as is Andhra Pradesh Chief Minister Kiran Kumar Reddy.

Outside Nellore station an angry crowd of about 1000 people has reportedly gathered and is asking some tough questions. (NDTV).