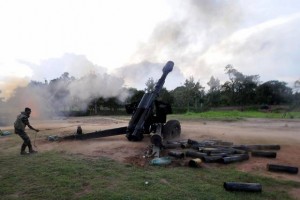 Former Sri Lankan Army Commander Sarath Fonseka has warned that the United Nations (UN) is expected to introduce some regulations soon through which a delegation will be able to come to Sri Lanka even without visas to investigate the incidents which took place during the war.

He said that the European Parliament has already said that allegations of war crimes which took place in Sri Lanka should be investigated through an international body.

â€œThe UN is now trying to bring a regulation where they will be able to send an international committee to investigate what took place in Sri Lanka and the committee will be able to come to Sri Lanka without a visa. An international committee will definitely come to this country. They will then question me not about things that happened after I contested for President but what happened when I was in military uniform. I will need to respond to it then,â€ he said.

The European Union (EU) had said recently that it wants an independent investigation and evaluation into the final years of the war in Sri Lanka, in addition to the national enquiries.

The UN and human rights organizations have also been calling for an independent international investigation in the country,

Calls for an international investigation gathered steam recently following the publication of images claiming to show the son of LTTE leader Vellupilla Prabakaran shot dead while in army custody.