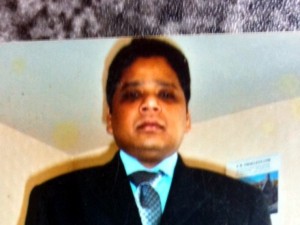 An LTTE fighter who lived with a bullet lodged in his head for more than 10 years, died as a result of the injury, an inquest held in Britain was told.

Father of one, Ramachandaran Sivakumar, 41, fell in his bathroom at his home in Melrose Avenue in Cricklewood on December 21, following a seizure, Kilburn Times reported.

He was taken to the Royal Free Hospital in Pond Street where he died two days later.

Sivakumar came to London in 2001 with his wife seeking political asylum.

Back in his native Sri Lanka, he had been fighting with the LTTE for 13 years and he was injured on the battle field by a bullet or shrapnel in his head.

The court heard that he developed epilepsy as a result.

Sivakumarâ€™s wife, Thuvaginy told the British court that she knew her husband had suffered dizzy episodes in the past. Speaking through a translator she said: â€œI hadnâ€™t seen any but I was told by others, his mother told me and so did some of his work mates.

â€œHe never openly told me because I would worry.â€

She added that in Sri Lanka, he did not have access to the correct medicine.

Breaking into tears, Mrs Sivakumar told the court about the day her husband fell in the bathroom, recalling that their young daughter was home because it was the middle of the school holidays.

â€œHe had to go work at 3pm so he went to the bathroom and brushed his teeth.

â€œThen a bit later he locked the door.

â€œAround 12 minutes later I heard he was falling down.

â€œThere was no shout.

â€œI was screaming and shouted at my daughter to call an ambulance and I took a knife and tried to open the bathroom door,â€ she said.

After his death, pathologist Alan Bates confirmed that there was a metal object in Mr Sivakumarâ€™s brain.

In a statement read out by deputy coroner Gail Elliman, he said: â€œThe brain contains two foreign objects, one appears to be metallic and the other might be a bony object or other material.â€

He added that the metal object had a bullet-like shape, but could have also been shrapnel.

She said: â€œRamachandaran Sivakumar suffered from epilepsy as a result of an injury which was most probably caused during fighting in Sri Lanka.

â€œOn 21 December 2012, he was heard to collapse in the bathroom of his house.

â€œHe was taken to the Royal Free Hospital where his death was confirmed at 23.50 on 23rd December, with his epilepsy found to be directly related to his injury and the cause of that injury remains unknown.â€