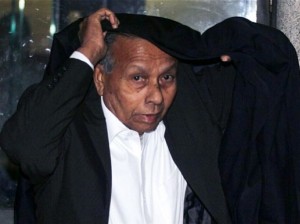 Former Sri Lankan MP Tudor Gunasekara, 77, who said he was one of Sri Lanka’s leading businessmen, was fined at the Old Bailey (London) yesterday after being convicted of groping a masseur’s breast.

But after he was found guilty of sexual assault, Judge Charles Wide QC ordered an investigation by the Legal Service Commission as to whether the former ambassador to Poland committed fraud.

Gunasekara had claimed he survived on just £100 a month from his state pension after transferring all his wealth to his son.

But Judge Wide said: “This is a serious inquiry. This man appears to be quite a rich man and the British taxpayers paid for his defence in a case where he was patently guilty.

“He was prepared for the British taxpayers to subsidise his defence.” He asked for the Legal Service Commission to investigate ‘whether his legal representation order was obtained by fraud’.

Gunasekara, who is married with two children and a prominent member of the United National Party, was found guilty of sexually assaulting a masseur at a well known high street gym and spa in Wimbledon this May.

As he received a massage he reached out to grab the masseur breast as she kneaded his shoulders which caused the respectable and conscientious woman to flee pressing the panic button.

Prosecutor Robin Griffiths addressing the jury said: “You may think it was that close proximity between him and her at that late stage of a full Swedish massage when he simply lost his self restraint and groped her.”

The jury took less than half an hour to find him guilty.

But Mr Griffiths added Gunasekara tried to blame the masseur saying “it was the therapist that made the improper proposal she could give him better service for an extra £50 on top of the already inflated figure he claimed she charged him at the beginning of the day before proceedings began.”

He claimed he had paid £100 for a foot massage to relieve the pain in his foot because of the diabetes he suffered from for the last quarter of a century but the woman began giving him a full body rub before making the indecent proposal.

Judge Wide QC added: “It was a really nasty offence.

“When good character is relied upon in your case, it does help me to understand what sort of man you are.

“What you did was really bad. To get yourself off the hook, and for no other reason, you accused this completely blameless sensible and conscientious woman of having stolen from her employer by keeping the money and getting more out of you by then offering you extra special services.”

He said the woman masseur who worked as a beautician was “entirely respectable” as was the spa but Gunasekara made inappropriate remarks about her private life, asked her back to his hotel room, and then offered to read her palm as a means to get intimate with her.

When that failed he offered her money but when his advances were rejected, he lunged at her.

Judge Wide said: “It was obviously very, very upsetting for her. She fled from the room in high distress, pushing the panic button as she went.”

Former Sri Lankan Ambassador Tudor Gunasekara was accused of “lying” to the Old Bailey and in his legal aid application about his wealth.

The court heard despite claiming he only had a £100 a month to live off, he had £1,850 and $631 in cash, and £50 worth of traveller’s cheques when he was arrested for groping a masseur’s breast.

Yet despite the sums readily at hand he pleaded poverty and got legal aid to fight his case.

Gunasekara had travelled to the UK to visit his grandchildren when he groped the masseur’s breasts. In Sri Lankan he lives on a 25 acre estate complete with servants.

Judge Wide QC exploded with rage when he learnt of the legal aid funding adding: “The British public would be appalled to know they are paying for this man’s costs – one of Sri Lanka’s leading successful businessmen and government minister and ambassador to Poland and he say’s he’s got no money.

“I think it is a lie, I think it is one of a number of lies he told in this court. “Frankly I don’t think the British public should pay a penny to this.”

As well as being ordered to pay £7,420 in fines, compensation and legal costs, with £15 victim’s surcharge, the country’s first ambassador to Poland, Bulgaria, Rumania and Hungary was ordered to be placed on the sex offenders register.

Speaking outside court Det Con Jamie McIntosh said: “The time the jury took is illustrative of the incredible defence he put forward.

“The victim has been consistent and I am happy she can now move on and put this all behind her knowing justice has been done.

“The Met Police take every allegation of sexual assault seriously and will investigate it thoroughly no matter what the social status of the suspect.” (The Telegraph)