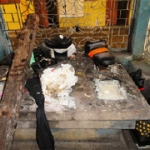 Four Hindu temples in one night was ransacked and damaged by unidentified persons in the Batticaloa district. The source sculpture and other idols were damaged and the jewelry and money had been looted was said.
Tension prevailed in the Batticaloa town two days back due to this incident. Speculations emerged in the midst of people that the court refused to grant permission to erect a Buddhist statue at the BatticaloaÂ  Pillaiyaaradi corner and these attacks against temple may be the consequences of it.
The Kurukkal center of Sri Sellakathirgamar temple, Batticaloa, Maangadu Pillaiyar Temple, Kirankulam Iyanaar temple, Pandiruppu Thirowpathiyamman temple authorities claimed that unidentified persons had executed this barbaric action.
The objective of this attacks in damaging the Hindu temples and stealing the most valuable items is in the backdrop of this incidents was said by Temple administration and the people from the region.
19 deities from the Batticaloa Kurugal Madam Sri Seelakathirgarmar temple had been damaged. 20 gold sovereign jewels and a gold plate kept underneath the statue were stolen.
The significant sculpture and other idols existed at the Pillaiyar temple located at Batticaloa Maangadu village had been damaged.
Meanwhile cash till was looted and the gold jewelry has been stolen at the Iyanaar temple situated between Kirankulam village and Ambilanthurai, was said.
The relevant temple administration has made complaints regarding these three incidents, to the Kaluwanchikudy police.
Meanwhile the Kumbabishega Kalasam which was in the Pandiriuppu Thirowpathiyamman temple locatedÂ  at Batticaloa Amparai periphery was damaged, and the money from the cash till and jewels were stolen is according to information. The temple administration made a complaint regarding this incident to the Kalmunai Police.