<![CDATA[French and Malian troops have begun restoring government control over Timbuktu, the latest gain in a fast-moving offensive against Islamist fighters allied to al-Qaida who have occupied northern <a title="More from guardian.co.uk on Mali" href="http://www.guardian.co.uk/world/mali">Mali. The rebels have retreated northwards to avoid relentless French air strikes that have destroyed their bases, vehicles and weapons, allowing ground troops to advance rapidly with armoured vehicles and air support. A Malian military source told Reuters that the French and Malian forces reached the gates of Timbuktu late on Saturday without resistance from the insurgents who had held the town since last year. 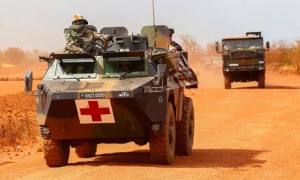 The advancing troops were working on securing the town, a Unesco world heritage site and labyrinth of ancient mosques, monuments and mud-brick homes, ready to flush out any fighters who may still be hiding among the population. “Timbuktu is delicate. You can’t just go in like that,” the source, who asked not to be named, said. On Saturday, troops recaptured Gao, which along with Timbuktu was one of three major northern towns occupied last year by Tuareg and Islamist rebels whose ranks included fighters from al-Qaida in the Islamic Maghreb. The third town, Kidal, remains in rebel hands. The US and Europe are backing the UN-mandated operation as a campaign against the threat of jihadists using Mali’s Sahara desert region as a launching pad for international attacks. One Timbuktu resident now outside the town said a friend inside had sent him text messages saying he had seen government troops on the streets, but gave no more details. The rebels in the town provoked international outrage by destroying ancient shrines sacred to moderate Sufi Muslims. They also imposed strict sharia law, including amputations for thieves and the stoning of adulterers. Malian government control was restored in Gao after French special forces backed by warplanes and helicopters seized the town’s airport and a key bridge. Around a dozen “terrorists” were killed in the assault, while French forces suffered no losses or injuries, the country’s defence ministry said. The rebels appeared to be withdrawing further north into the trackless wilderness of the Sahara, from where some military experts fear they could wage a guerrilla war. Officials said the mayor of Gao, Sadou Diallo, who had taken refuge in Bamako during the occupation, had been reinstalled at the head of the local administration while French, Malian, Chadian and Nigerian troops secured the town and the surrounding area. As the French and Malian troops push northwards, African troops from a regional intervention force expected to number 7,700 are being flown into the country, despite delays caused by logistical problems and the lack of airlift capacity. (The Guardian)]]>