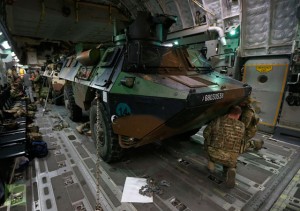 Malians hoping French troops have arrived to save them from Islamists may see other objectives revealed. France views Mali as a promising source of uranium and oil, and part of a geopolitical game, say observers. Middle-East access and pushing China out of the African market are apparently in French sights. Once the worldâ€™s second-largest colonial empire, France may be striving to regain influence in its former African colonies, the Mali operation being part of such policy. France was one of the first to jump in and send its warplanes against the regime in Libyan civil war, and now it is the only Western power that has sent troops to aid the struggling Malian army. Indeed, France is the only European country that has a network of military bases with thousands of troops stationed in Africa, and its economic ties in the region are also well-established. But neither French nor Western influence in Africa is undisputed, with local groups and international players challenging Franceâ€™s power and forcing it to take strategic steps to ensure it retains its position. Direct military intervention serves as a way to secure the long-term profit for the French government, and French troops have intervened in Africa 50 times since the official decolonization. â€œTheyâ€™re attempting to militarize huge sections of Africa so theyâ€™re able to monopolize the access to the resources which are there,â€ Ceasefire magazine associate editor Adam Elliott-Cooper told RT. Not only is Mali the third-largest gold producer, it also possesses untapped oil and mineral reserves, which have stirred foreign interest. But especially attractive are the countryâ€™s potential uranium deposits. â€œIn the long term, France has interests in securing resources in the Sahel â€“ particularly oil and uranium, which the French energy company Areva has been extracting for decades in neighboring Niger,â€ Katrin Sold of the German Council on Foreign Relations said, as quoted by DW.de. The Sahel is a roughly 1000km-wide belt on the border of the Sahara, which passes through central Mali. Nearly 80 per cent of Franceâ€™s energy generated by 60 nuclear power plants is dependent on African uranium. In order to secure these resources France clearly needs to maintain security and pro-French rule in the region. It launched a military operation as soon as the Malian situation began to get out of hand. France has also ordered Special Forces to protect uranium sites in neighboring Niger, a military source told Reuters on Thursday.

Getting its neo-colonial way

With all the talk about Western interests in the region, it is often overlooked that such countries as Mali remain among the poorest nations of the world, despite their abundant natural resources. People in Mali have now welcomed French troops as somebody to save them from Islamic militants, but they have never been promised any profits from French economic ambitions in the country, former Tunisian ambassador to UNESCO Mezri Haddad told RT. â€œIt is OK is you come and use resources, but then itâ€™s logical that locals profit as well and that those riches go to improve their life. But thatâ€™s not the case â€“ this way is wild, a kind of slavery,â€ Haddad said. Decolonization is far from over, and France is just one of the parties having a keen interest in African Neo-colonialism, Bruno Drweski of the French National Institute of Oriental Languages and Civilizations told RT. â€œApart from economic thereâ€™s also a strategic importance: this part of Africa opens routes to the Red Sea and the Middle East. Britain and France have for centuries fought over it. Itâ€™s like a remake, but with many others involved,â€ Drweski argued. Even though the French public and media have not been particularly happy over the military operation aiming for â€œthe total re-conquest of Maliâ€ in the words of Franceâ€™s defense minister, few French sources want to draw parallels with the African colonial past. Former French President Valery Giscard d’Estaing was one of those few openly speaking against the perceived French Neo-colonialism. â€œI want to prevent a course of action that could be of a Neo-colonial nature in Mali,â€ d’Estaing told Le Monde, urging French government to stick to â€œsupplying logistic supportâ€ to Mali, instead of surging the fighting and the airstrikes, which could lead to â€œmeaningless destructionâ€ and dire â€œpolitical consequences.â€ Western nations are seizing every opportunity leading to gain more control over Africa, even making use of such factors as â€œa little more terrorismâ€ in the region, as British anthropologist Jeremy Keenan labeled it in his book The Dark Sahara. Not everyone in France agrees, though, that all such means are justifiable. â€œFrancois Hollande has seen fit to justify French military intervention in Mali with the drama of the hostages in Algeria which left 30 dead according to official sources. Far from justifying Franceâ€™s neocolonial intervention, it condemns it,â€ Franceâ€™s New Anti-Capitalist Party said in a statement.

In recent years, China has been forging successful economic partnerships throughout Africa, entering the region with the benefit of never having been a colonial power there. This is a clear threat to Western energy interests. The French are following in the footsteps of US militaryâ€™s Africa Command (AFRICOM), Adam Elliott-Cooper told RT. Created in 2007, it served the militarization of Africa aimed to control more energy resources. Vice-Admiral Robert T. Moeller has openly declared AFRICOMâ€™s guiding principle as protecting â€œthe free flow of natural resources from Africa to the global market.â€ Challenging US interests in the region is China, he added. Echoing Moeller is the French Finance Minister Pierre Moscovici, who urged French companies â€œto go on the offensive and fight the growing influence of rival China for a stake in Africa’s increasingly competitive markets.â€ It is widely-acknowledged that â€œthis part of the world was escaping from France so [the French want] to remain present in the region,â€ Philippe Moreau-Defarges of the IFRI think-tank was quoted by AFP. (RT News)
Â
]]>