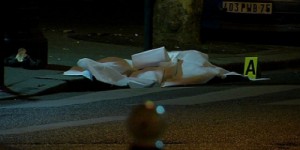 French police arrested 2 Sri Lankan origin suspects in dawn raids on Sunday in a hunt for the killers of Tamil national activist Parithy.

Nadaraja Mathinthiran (49) was shot dead on Thursday in Paris when he came out of the headquarters of the Tamil Coordination Committee in France (CCTF).

The killings last Thursday in Paris sparked outrage among the Tamils in France and world.

Arrested Sri Lankan men on Sunday in Villeneuve-Saint-Georges in Paris were aged between 33 and 29, police said. French police officers are conducting further investigation about the political assassination.

The Paries Tamil media reports that Parithy’s work against Sri Lankan war crimes might have made him a target for assassination.