It was no secret that Mohandas Gandhi had an unusual sex life. He spoke constantly of sex and gave detailed, often provocative, instructions to his followers as to how to they might best observe chastity. And his views were not always popular; “abnormal and unnatural” was how the first Prime Minister of independent India, Jawaharlal Nehru, described Gandhi’s advice to newlyweds to stay celibate for the sake of their souls.

But was there something more complex than a pious plea for chastity at play in Gandhi’s beliefs, preachings and even his unusual personal practices (which included, alongside his famed chastity, sleeping naked next to nubile, naked women to test his restraint)? In the course of researching my new book on Gandhi, going through a hundred volumes of his complete works and many tomes of eye-witness material, details became apparent which add up to a more bizarre sexual history. 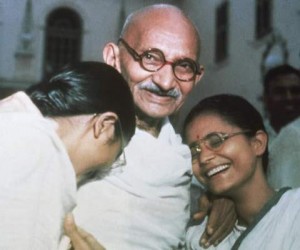 Much of this material was known during his lifetime, but was distorted or suppressed after his death during the process of elevating Gandhi into the “Father of the Nation” Was the Mahatma, in fact, as the pre-independence prime minister of the Indian state of Travancore called him, “a most dangerous, semi-repressed sex maniac”?

Gandhi was born in the Indian state of Gujarat and married at 13 in 1883; his wife Kasturba was 14, not early by the standards of Gujarat at that time. The young couple had a normal sex life, sharing a bed in a separate room in his family home, and Kasturba was soon pregnant.

Two years later, as his father lay dying, Gandhi left his bedside to have sex with Kasturba. Meanwhile, his father drew his last breath. The young man compounded his grief with guilt that he had not been present, and represented his subsequent revulsion towards “lustful love” as being related to his father’s death.

However, Gandhi and Kasturba’s last child wasn’t born until fifteen years later, in 1900.

In fact, Gandhi did not develop his censorious attitude to sex (and certainly not to marital sex) until he was in his 30s, while a volunteer in the ambulance corps, assisting the British Empire in its wars in Southern Africa. On long marches in sparsely populated land in the Boer War and the Zulu uprisings, Gandhi considered how he could best “give service” to humanity and decided it must be by embracing poverty and chastity.

At the age of 38, in 1906, he took a vow of brahmacharya, which meant living a spiritual life but is normally referred to as chastity, without which such a life is deemed impossible by Hindus.

Gandhi found it easy to embrace poverty. It was chastity that eluded him. So he worked out a series of complex rules which meant he could say he was chaste while still engaging in the most explicit sexual conversation, letters and behaviour.

With the zeal of the convert, within a year of his vow, he told readers of his newspaper Indian Opinion: “It is the duty of every thoughtful Indian not to marry. In case he is helpless in regard to marriage, he should abstain from sexual intercourse with his wife.”

Meanwhile, Gandhi was challenging that abstinence in his own way. He set up ashrams in which he began his first “experiments” with sex; boys and girls were to bathe and sleep together, chastely, but were punished for any sexual talk. Men and women were segregated, and Gandhi’s advice was that husbands should not be alone with their wives, and, when they felt passion, should take a cold bath.

The rules did not, however, apply to him. Sushila Nayar, the attractive sister of Gandhi’s secretary, also his personal physician, attended Gandhi from girlhood. She used to sleep and bathe with Gandhi. When challenged, he explained how he ensured decency was not offended. “While she is bathing I keep my eyes tightly shut,” he said, “I do not know … whether she bathes naked or with her underwear on. I can tell from the sound that she uses soap.” The provision of such personal services to Gandhi was a much sought-after sign of his favour and aroused jealousy among the ashram inmates.

As he grew older (and following Kasturba’s death) he was to have more women around him and would oblige women to sleep with him whom – according to his segregated ashram rules – were forbidden to sleep with their own husbands. Gandhi would have women in his bed, engaging in his “experiments” which seem to have been, from a reading of his letters, an exercise in strip-tease or other non-contact sexual activity. Much explicit material has been destroyed but tantalising remarks in Gandhi’s letters remain such as: “Vina’s sleeping with me might be called an accident. All that can be said is that she slept close to me.” One might assume, then, that getting into the spirit of the Gandhian experiment meant something more than just sleeping close to him.

It can’t, one imagines, can have helped with the “involuntary discharges” which Gandhi complained of experiencing more frequently since his return to India. He had an almost magical belief in the power of semen: “One who conserves his vital fluid acquires unfailing power,” he said.

Meanwhile, it seemed that challenging times required greater efforts of spiritual fortitude, and for that, more attractive women were required: Sushila, who in 1947 was 33, was now due to be supplanted in the bed of the 77-year-old Gandhi by a woman almost half her age. While in Bengal to see what comfort he could offer in times of inter-communal violence in the run-up to independence, Gandhi called for his 18-year-old grandniece Manu to join him – and sleep with him. “We both may be killed by the Muslims,” he told her, “and must put our purity to the ultimate test, so that we know that we are offering the purest of sacrifices, and we should now both start sleeping naked.”

Such behaviour was no part of the accepted practice of bramacharya. He, by now, described his reinvented concept of a brahmachari as: “One who never has any lustful intention, who, by constant attendance upon God, has become proof against conscious or unconscious emissions, who is capable of lying naked with naked women, however beautiful, without being in any manner whatsoever sexually excited … who is making daily and steady progress towards God and whose every act is done in pursuance of that end and no other.” That is, he could do whatever he wished, so long as there was no apparent “lustful intention”. He had effectively redefined the concept of chastity to fit his personal practices.

Thus far, his reasoning was spiritual, but in the maelstrom that was India approaching independence he took it upon himself to see his sex experiments as having national importance: “I hold that true service of the country demands this observance,” he stated.

But while he was becoming bolder in his self-righteousness, Gandhi’s behaviour was widely discussed and criticised by family members and leading politicians. Some members of his staff resigned, including two editors of his newspaper who left after refusing to print parts of Gandhi’s sermons dealing with his sleeping arrangements.

But Gandhi found a way of regarding the objections as a further reason tocontinue. “If I don’t let Manu sleep with me, though I regard it as essential that she should,” he announced, “wouldn’t that be a sign of weakness in me?”

Eighteen-year-old Abha, the wife of Gandhi’s grandnephew Kanu Gandhi, rejoined Gandhi’s entourage in the run-up to independence in 1947 and by the end of August he was sleeping with both Manu and Abha at the same time.

When he was assassinated in January 1948, it was with Manu and Abha by his side. Despite her having been his constant companion in his last years, family members, tellingly, removed Manu from the scene. Gandhi had written to his son: “I have asked her to write about her sharing the bed with me,” but the protectors of his image were eager to eliminate this element of the great leader’s life. Devdas, Gandhi’s son, accompanied Manu to Delhi station where he took the opportunity of instructing her to keep quiet.

Questioned in the 1970s, Sushila revealingly placed the elevation of this lifestyle to a brahmacharya experiment was a response to criticism of this behaviour. “Later on, when people started asking questions about his physical contact with women – with Manu, with Abha, with me – the idea of brahmacharya experiments was developed … in the early days, there was no question of calling this a brahmacharya experiment.” It seems that Gandhi lived as he wished, and only when challenged did he turn his own preferences into a cosmic system of rewards and benefits. Like many great men, Gandhi made up the rules as he went along.

While it was commonly discussed as damaging his reputation when he was alive, Gandhi’s sexual behaviour was ignored for a long time after his death. It is only now that we can piece together information for a rounded picture of Gandhi’s excessive self-belief in the power of his own sexuality. Tragically for him, he was already being sidelined by the politicians at the time of independence. The preservation of his vital fluid did not keep India intact, and it was the power-brokers of the Congress Party who negotiated the terms of India’s freedom.

Gandhi: Naked Ambition is published by Quercus (£20). To order a copy for the special price of £18 (free P&P) call Independent Books Direct on 08430 600 030, or visit www.independentbooksdirect.co.uk