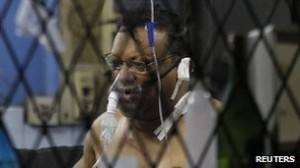 The international human rights groups say rule of law problems persist, including abductions and attacks on media and government critics.

Doctors at the Colombo National Hospital said Faraz Shaukatally, 52, a journalist at the Sunday Leader newspaper, was undergoing further tests before being admitted for surgery.

Police said three unidentified gunmen entered the guest house where Shaukatally was staying, broke into his room and opened fire. Sunday Leader Editor Sakunthala Perera said the journalist was shot while he was on the telephone discussing a story to appear in this week’s edition.

An editor of the Sunday Leader Lasantha Wickremathunga was killed in January 2009 and other staff journalists have also been attacked, but no arrests have been made.

Sri Lanka’s rights record has been subject to criticism over alleged excesses during the military’s final phase of war. Rights groups say the military killed thousands of minority ethnic Tamil civilians in the final weeks of the conflict.