<![CDATA[With the academic activities of the Jaffna University coming to a grinding halt in protest of police and military atrocities during the past three days, Sri Lankaâ€™s defence authority has increased the military presence around the Jaffna University amid fears that there could be more arrests of University students on false charges of terrorism related activities. <a href="http://www.eelamenews.com/?attachment_id=106677" rel="attachment wp-att-106677"> 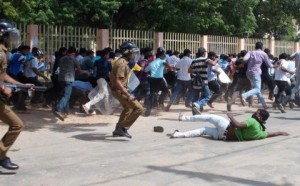 It is reliably learnt that the Jaffna University administration has been given a wanted list of names of at least ten University students following the police-military joint attack on the students on November 27 and 28. Acting Vice Chancellor of the University Prof. Velnamby however, has refused to speak to the media in this regard. According to media and academic sources in the islandâ€™s north, the military which was drastically reduced following the raid on the ladiesâ€™ hostels on November 27 and the unprovoked attack on the peaceful studentsâ€™ march on November 28, has been visibly increased in the vicinity of University from the early hours of today (02). â€œThe University area looks virtually like a battlefield with the unusual presence of heavily armed military personnel. You could see hundreds of soldiers guarding all the roads and lanes leading to the Jaffna University and carrying out random checks using sniff dogs on almost all the commuters in a threatening manner,â€ the sources told the JDS from Jaffna via phone. â€œThis has increased a very tensed atmosphere in the area and instilled fear among the students using the hostel facilities, especially after the arrest of four students by the Terrorism Investigation Division (TID). The students in the hostels are facing great difficulties even in getting their food as a result,â€ the sources said. Attempt for more arrests Meanwhile, a police team has visited the house of Management Faculty Union leader, Paranthaman Sabeskumar in the early hours of Sunday (02) to arrest him. As he was not present at home at the time of the police visit, his parents were ordered that he be produced at the Jaffna police station before noon to avoid them being arrested. Sri Lankaâ€™s police chief, DIG N. Illankakoon when contacted by the leader of the Tamil National Alliance (TNA) R. Sampanthan, had claimed no knowledge of the predawn move by the police to arrest Sabeskumar. DIG Ilankakoon however, has confirmed to the TNA leader during his conversation via phone the arrest of the four other university students on Saturday, informing him that they were being kept and interrogated by the TID at the Vavuniya prison. Secretary of the Jaffna Studentsâ€™ Union Paramalingham Darshananth (24) of Kantharmadam, Arts Faculty Union President Kanakasundaraswami Jenamejeyan (24) of Puthukkudiyiruppu, Science Faculty Union member Shamugam Solomon (24) of Jaffna and Ganeshamoorthy Sutharshan (22) of Urumpirai were arrested byÂ  the police on Saturday. False charges Police spokesman SSP Prashantha Jayakody has told the media in Colombo that these University students have been arrested â€œon charges of throwing petrol bomb at a pro-government Tamil party office in Jaffna and pasting posters supporting the militarily defeated Tamil Tiger rebelsâ€. The academic sources of the University, however, have rejected these charges as â€œfake, fabricated and politically-motivated to stifle the independency and integrity of the Jaffna Universityâ€. â€œThe military, which virtually runs the daily affairs of the north and the east despite the presence of a so-called civil administration, is hell-bent on establishing its administration even in the Jaffna University. It is unacceptable for the military to practise its anti-terrorism tactics on the innocent studentsâ€™ society in the war-ravaged Jaffna,â€ he told the JDS from Jaffna. â€œThe University administrations are under the University Grants Commission and Ministry of Higher Education, and certainly not under the Ministry of Defence,â€ he said angrily reacting to the recent military activities. The University students who boycotted their classes initially for two days in protest of the attacks have now decided to continue their boycott campaign indefinitely with the arrest of four fellow students. The students are demanding that the University Administration should ensure the safety and integrity of the University, instead of allowing the military to run the administration at their will. Meanwhile, the TNA and the Tamil National Peopleâ€™s Front (TNPF) have decided to launch a joint protest rally in Jaffna on Tuesday (December 4) to condemn the ongoing military aggression on the Jaffna studentsâ€™ society. Â© JDS]]>