<![CDATA[Personal and stinging attacks in the state media heralded the US secretary of state's arrival in Beijing. "Many people in China dislike Hillary Clinton," said an editorial in the state-run Global Times. "She has brought new and extremely profound mutual distrust between the mainstream societies of the two countries." Such stringent remarks were extremely unusual on the eve of a visit by a US secretary of state, noted Shi Yinhong, an expert on the bilateral relationship. <a href="http://www.eelamenews.com/?attachment_id=102460" rel="attachment wp-att-102460"> 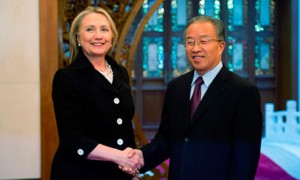 While Clinton’s press conference with Chinese foreign minister Yang Jiechi was more civil, it suggested no sign of movement on key issues. The two countries remain at an impasse over Syria and tension persists over the complicated and long-running territorial wrangle in the South China Sea, involving China and numerous other regional powers. Both sides – but particularly the US – were likely to have sought discussion on the intensifying Sino-Japanese row over the Diaoyu islands in the East China Sea, added Shi, who is director of the Centre for American Studies at Renmin University. He added: “In the past, when the relationship has not been good, they have tried to improve the atmosphere. But even the appearance has not been remarkably improved, let alone the substance.” Yan Xuetong, director of the Institute of International Studies at Tsinghua University, said the relationship appeared to be at its lowest point since Obama came to power. Yan said China wanted the US “to take a more constructive policy to reduce these conflicts [over the Diaoyutai and South China Sea] rather than allow them to escalate”. Many in China fear Washington is seeking to contain its rival as it grows more powerful, particularly since its decision to refocus foreign policy. “The US has tried to pivot to Asia. That’s a new strategy and has created some suspicions on the Chinese side,” said Jin Canrong, professor of international relations at Renmin University. “Fortunately, the mainstream on the Chinese side are rather reasonable … The result is that although the atmosphere is not good, the structure remains the same: competition and cooperation coexisting.” Some fear relations could deteriorate if China becomes a high-profile issue in the US presidential race. But Chinese observers are used to candidates talking tough about Beijing during elections before reverting to a more measured stance. “Despite the bluffing on the campaign trail, from the Chinese perspective we should assume whoever becomes president of the US will have enough composure to realise the stupidity of fooling around with China-US relations, which are the most important bilateral relationship in the world,” said Victor Gao, director of the China Association of International Studies and a former translator for Deng Xiaoping. “It’s not a zero-sum game, like with the US and the former Soviet Union.” (The Guardian)]]>