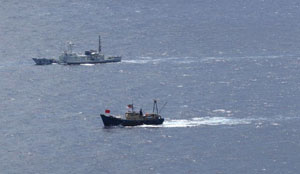 Nearly seven decades after Japan surrendered, leadership changes in Northeast Asia are fuelling territorial disputes that are themselves the legacy of a war the region never really settled, analysts say.

Long-running spats that Tokyo has with Seoul and Beijing have reared their heads anew as South Korea and China ready for a shift at the top, with politicians in both nations banging nationalistic drums.

Japan’s own fractious and fracturing political scene is bringing a similar sentiment to the surface at home, where a weakened government is seemingly unable to prevent things spinning out of control.

As Asia marked the 67th anniversary of the end of the World War II — liberation from the yoke of Japanese rule for much of the continent — China and South Korea again demanded Tokyo face up to its misdeeds.

Both nations have also pushed their claims to islands that Japan says it owns, taking advantage, analysts say, of the confused political scene in Tokyo.

Where the fall of the Berlin Wall proved closure of sorts for Europe’s post-war division, Asia is still struggling to sort out the aftermath of the conflict, said Takashi Terada, professor of international politics and Asia-Pacific studies at Doshisha University in Kyoto, Japan.
“Europe has more or less sorted out the legacy of Cold War, but it is still visible in Asia,” he told AFP.

A general election is due later this year in South Korea and Beijing is readying for a once-in-a-decade power transfer when President Hu Jintao and other leaders step down from their top Communist Party posts this autumn.

These domestic power shifts “have made it more difficult for the two governments to downplay (territorial) issues”, Jia said. “So they need to act tough as well.”Chinese University of Hong Kong assistant professor Wang Yu agreed: “During this period, all politicians have to be hawkish, they have to show to their domestic supporters that they won’t make any kind of compromise with a foreign force,” he said.

Beijing and Tokyo both claim a chain of uninhabited but resource-rich islands less than 200 kilometres (125 miles) off the coast of Taiwan.
Japan controls the Senkakus but China is unwilling to rescind its claim to the archipelago, which it knows as Diaoyu, the scene of regular confrontations between Japanese coastguard vessels and Chinese fishing boats.

Tokyo’s usually slumbering dispute with Seoul over islets half way between the two countries erupted last week when President Lee Myung-Bak led a landing party where he proclaimed them “a place worth staking our lives to defend”.

Tokyo recalled its ambassador, but Lee ploughed on, scoring domestic points when he said Japan’s Emperor Akihito would have to apologise for past excesses if he wished to visit South Korea.

Things worsened on Wednesday with the visit to Yasukuni Shrine, which honours 2.5 million war dead — including 14 top war criminals — by two members of Japan’s cabinet.

Prime Minister Yoshihiko Noda had asked his ministers to stay away, but his own collapsing popularity and a probable general election later this year left him without the authority to stop the visits.

Analysts say this revolving prime ministerial door, which has welcomed six men in as many years, has eroded Japan’s diplomatic presence on the world stage, and allowed competitors to gain the upper hand in squabbles.

“A frequent change in premiership may let neighbours make light of Japan,” Doshisha’s Terada said. “They think Japan may not hit back even if they push a tough stance on territorial issues.”But, said Hideshi Takesada, a Japanese professor of Asian Studies at Yonsei University of South Korea, a rising tide of nationalism in Japan could yet push the officially pacifist government into confrontation with China.

“In practical terms, it is possible for the Japanese government to order the deployment of the Maritime Self-Defense Force,” said Takesada, former researcher at Japan’s National Institute for Defense Studies.

For Tokyo, he says, much as for Beijing, the islands are a red line that it is ultimately not willing to allow anyone to cross.
“If Japan lost Senkaku, it would lose a significant portion of of its frontline defence,” he added.

“Moreover, a weak-kneed response will lead to similar results in other fields.” (AFP)