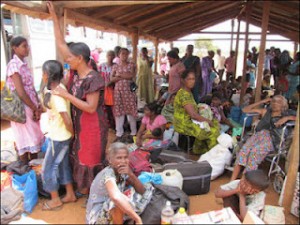 Human Rights Watch (HRW), a global human rights organisation, is to release a highlyÂ controversialÂ report on Sri Lanka next week whichÂ allegesÂ rape and torture of detainees at the hands of the army and police.

According to The Hindu newspaper, HRW is to seekÂ an international investigation into reports of sexual violence, rape, third degree torture against Tamil women and men carried out by the Sri Lankan security forces to get confessions from those suspected to have links with the then LTTE.

The HRW, which has prepared a 140-page report, â€œâ€˜We Will Teach You a Lessonâ€™: Sexual Violence against Tamils by Sri Lankan Security Forces,â€ which is to be released on Monday, provides detailed accounts of 75 cases of alleged rape and sexual abuse that occurred from 2006 to 2012 in both official and secret detention centres throughout Sri Lanka, The Hindu newspaper reported.

While widespread rape in custody occurred during the armed conflict (with LTTE) that ended in May 2009, â€œHRW found that politically motivated sexual violence by the military and police continues to the present.â€ HRW Asia Director Brad Adams claimed: â€œThe Sri Lankan security forces have committed untold numbers of rapes of Tamil men and women in custody. These are not just wartime atrocities but continue to the present, putting every Tamil man/woman arrested for suspected LTTE involvement at serious risk.â€

Adams said the United Nations Human Rights Council (UNHRC) should direct the U.N. High Commissioner for Human Rights to conduct an independent international investigation. â€œThe governmentâ€™s response to allegations of sexual violence by its security forces has been dismissive, deeming them â€˜fakeâ€™ or â€˜pro-LTTE propaganda.â€™ Itâ€™s not clear who in the government knew about these horrific crimes. But the governmentâ€™s failure to take action against these ongoing abuses is further evidence of the need for an international investigation,â€ he said.

Quoting from the accounts of a 31-year-old Tamil woman who was picked up from her Colombo house by CID personnel in November 2011, the HRW said: â€œI was taken to the fourth floor of the CID office in Colombo. I was not given any food or water. The next day, the officials, who included a uniformed armed official, photographed me, took my fingerprints, and made me sign on a blank sheet of paper. They told me that they had all my husbandâ€™s details and kept asking me to disclose his whereabouts. When I told them my husband was abroad, they continued to accuse him of supporting the LTTE. I was beaten with many objects. I was burned with a cigarette during questioning. I was slapped around and beaten with a sand-filled pipe. Throughout the beatings, they asked me for my husbandâ€™s details. I was raped one night. Two men came to my room in civilian clothes. They ripped my clothes and both raped me. They spoke Sinhala so I could not understand anything. It was dark so I couldnâ€™t see their faces clearly.â€

Another 23-year-old male youth, caught in August 2012, said: â€œThey removed my blindfold [and] I found myself in a room where four other men were present. I was tied to a chair and questioned about my links to the LTTE and the reason for my recent travel abroad. They stripped me and started beating me. I was beaten with electric wires, burned with cigarettes and suffocated with a petrol-infused polythene bag. Later that night, I was left in a smaller room. I was raped on three consecutive days. The first night, one man came alone and anally raped me. The second and third night, two men came to my room. They anally raped me and also forced me to have oral sex with them. I signed a confession admitting my links with the LTTE after the rapes.â€

Yet another youth, who surrendered before the security forces in May 2009, said: â€œTwo officials held my arms back [while] a third official held my penis and inserted a metal rod inside. They inserted small metal balls inside my penis. These had to be surgically removed after I escaped from the country.â€ A medical report corroborates his account, said HRW.

The rights body alleged that the victims also described being beaten, hung by their arms, partially asphyxiated and burned with cigarettes. None of those who spoke to HRW had access to legal counsel, family members, or doctors while they were detained. Most said that they signed a confession in the hope that the abuse would stop, though the torture, including rape, often continued. The individuals interviewed were not formally released but rather allowed to â€œescapeâ€ after a relative paid the authorities a bribe.