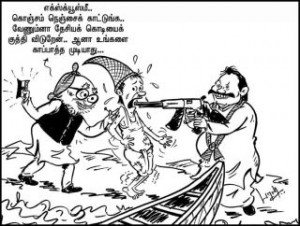 The DMK in Tamil Nadu, which quit the Indian government over the Sri Lankan Tamils issue, on Sunday slammed the Centre for adopting â€œdiscriminatoryâ€ approach in protecting fishermen from Tamil Nadu, who have been allegedly suffering at the hands of Sri Lankan Navy.

The Press Trust of India quoted DMK chief M. Karunanidhi as saying in a letter to his partymen that while the Centre initiated series of diplomatic and legal steps when two Italian Marines killed two fishermen from Kerala, the same approach was lacking when Tamil Nadu fishermen were battered by the Island nationâ€™s Navy.

Karunanidhi, while focusing on the plight of Tamil fishermen, questioned the Centre with a poser, â€œWhat has the Indian government got to say over the arrest of 19 Tamil fishermen who are lodged in a Lankan prison and whose remand has now been extended till April 11?â€.

Nineteen fishermen from Tamil Nadu were arrested by the Lankan Navy on March 13 for allegedly crossing into its territory and were later remanded to judicial custody in a prison at Anuradhapuram.

The DMK patriarch also sought to know from the Centre on how it would justify the â€œdiscriminationâ€ of fishermen from Kerala and Tamil Nadu.

â€œIs it justifiable to discriminate between fishermen from Kerala and Tamil Nadu? So far 600 Tamil fishermen have been killed by the Sri Lankan Navy. Were there at least one instance, where the Indian government has shown the same interest, approach and promptness in coming to the rescue of Tamil fishermen, as it had shown in the Kerala fishermen â€“ Italian Marines issue?,â€ he stated.

He found fault with the way the state government handled the arrest of five Sri Lankan fishermen and pointed out, â€œWhile arrested Tamil fishermenâ€™s remands are being extended (in Sri Lanka), those arrested Sinhalese fishermen are being released here in a haste.â€