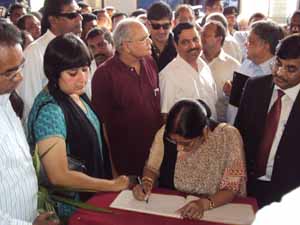 The Sampur coal power plant, a joint venture between the Ceylon Electricity Board (CEB) and Indiaâ€™s National Thermal Power Corporation Ltd., (NTPC) is embroiled in a long list of legal queries.

However, a fresh dispute over the land ownership has emerged and the CEB has indicated to its Indian partner that land arbitration would be a protracted process. The Indians also complain that though Trinco oil farms were leased to India in 2002, the lease agreement has not yet been signed.

The Sri Lankan government also refuse to give Palaly airport development project to the India.

They tend to view these actions as delaying tactics on the part of the government, which is reluctant to give much of a foothold for India in the North -Â East, while welcoming the Chinese with open arms.