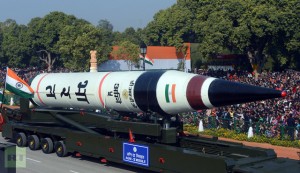 Republic Day, nominally a national holiday celebrating the introduction of a constitution following independence, is traditionally a display of nationalistic fervor, capped by a massive procession showing off all the latest military hardware. The pride of place this year was taken by Agni-V, a new-generation missile capable of carrying nuclear warheads as far as China and central Russia, which has been developed at a cost of more than half a billion US dollars. Although the missile underwent a successful test launch in August last year, this was the first time it has been shown to the wider public. With a range of at least 5,500 km (with some experts claiming its true â€œclassifiedâ€ reach is actually 8,000 km) the project puts India in an elite club of nuclear superpowers with intercontinental capabilities. The only other countries with such weapons are the US, Russia, UK, France and China (Israel also produces long-range missiles, but does not officially possess nuclear weapons). The display was covered closely by Chinese media, which have previously reacted warily to Indiaâ€™s desire to develop a longer-range weapon. Meanwhile, tensions with neighboring Pakistan, with whom India has long had a simmering conflict over the disputed region of Kashmir, was ratcheted up by comments from new President Pranab Mukherjee. “We believe in peace on the border and are always ready to offer a hand in the hope of friendshipâ€¦ but this hand should not be taken for granted,” warned Mukherjee in a speech that was televised twice on the eve and the day of the parade. The two countries agreed a tentative ceasefire last week after a spate of shootings, killing several border guards in recent months. Last year India invested nearly $50 billion into its armed forces â€“ making it the worldâ€™s seventh biggest national defense spender. Other prominent display items included a scale model of INS Vikramaditya, a converted Soviet-era aircraft carrier that will enter into service later this year, and Arjun tanks, the mainstay of the countryâ€™s modern armed forces. (RT News)]]>