<![CDATA[The Shiv Sena party has handed out knifes and chilli powder to women in Mumbai to send a message to â€˜eve-teasersâ€™ after the fatal gang rape of a student in Delhi last month, which has ignited debate on Indiaâ€™s appalling rise in sexual offenses. <!--RTEditor:genereated--> 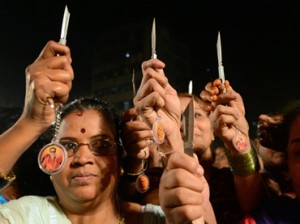 The Shiv Sena party, an ally of the main opposition Bharatiya Janata Party (BJP), has distributed 21,000 knives with 3-inch (7 cm) blades to women in Mumbai and its surrounding areas and plans to hand out a total of 100,000. â€œThis is a symbolic gesture. Its only to pass a signal to eve-teasers, anti-social elements and perpetrators of crime against women that women are empowered and can take care of themselves,â€ said Rahul Narvekar, a spokesman for the party. Eve teasing is an Indian euphemism for molesting women. â€œDonâ€™t be afraid of using this knife if someone attacks you. We have set up a team of nine advocates to protect you from any potential court cases that may arise.â€ Ajay Chaudhari, who is running the knife campaign for Shiv Sena, was quoted as saying by the Partyâ€™s newspaper, Saamana. The knifes, at only three inches, are shorter than six inches and therefore do not fit the definition of a weapon. However, Mumbai police said they were examining the knives and considering whether to pursue legal action. Women were also given small bags of chilli powder, apparently to throw into assailantâ€™s eyes. An attack on a woman on December 16th in New Delhi caused public outrage and brought the countryâ€™s shocking rise in sexual attacks on women to the forefront of national debate. A rape is reported in India on average every 20 minutes, but those that go unreported in the worldâ€™s second largest country are thought to be much higher. The victim, a 23-year old physiotherapy student, was raped and beaten on a moving bus and was then thrown bleeding onto a busy road in New Delhi. She died two weeks later in a hospital in Singapore. New Delhi is known as Indiaâ€™s â€˜rape capitalâ€™ whereas Mumbai is generally considered safer for women. As well as sparking national debate on the issue, a government commission has been set up to look at Indiaâ€™s sex crimes laws and announced this week that if a woman kills an attacker during an attempted rape, she should be able to plead self-defense. As well as Chilli powder and knifes Indian women have been taking up self-defense classes and carrying pepper spray. (RT News)]]>