<![CDATA[India's elusive nuclear weapon triad - the capability to fire nukes from the land, air and sea - has taken another leap closer to becoming an operational reality. Even as the indigenous nuclear submarine INS Arihant gets ready for sea trials, the country's first underwater ballistic missile "successfully" completed its developmental trials on Sunday. <a href="http://www.eelamenews.com/?attachment_id=108955" rel="attachment wp-att-108955"> 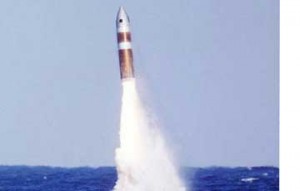 With this twelfth test of the K-15 missile conducted from a submerged platform or pontoon in the Bay of Bengal, DRDO officials said the 750-km range submarine-launched ballistic missile (SLBM) was now ready for induction. “The two-stage missile, which rapidly climbed to a 20-km altitude after being launched from the pontoon, was tested for its full range over 700-km. This was its last developmental test, in which all mission objectives were met,” said an official. “Now, the 10-metre tall missile, which can carry a one-tonne nuclear warhead, will undergo a user-trial within a month before it’s integrated into the submarine. Only the US, Russia, France and China have successfully developed SLBMs till now,” he added. There is reason to cheer but the bubbly can only be popped once the K-15 missiles are successfully tested from the 6,000-tonne INS Arihant, the country’s first indigenous nuclear-powered submarine, which is now all set to undergo “sea-acceptance trials” after its miniature 83 MW pressurized light-water reactor goes “critical” at Visakhapatnam soon. Navy chief Admiral D K Joshi last month had alluded to this, holding that the nation would get “good news” on this front “very soon”. INS Arihant has been undergoing extensive “harbor-acceptance trials”, with all its pipelines being “cleared and tested” on shore-based steam for several months now, before its reactor is “fired” for the sea-trials. Built with four silos to carry 12 K-15s, or four of the 3,500-km range K-4 missiles under-development at present, INS Arihant will of course have to test-fire the 10-tonne missile during the sea trials before it can be said that India’s long-awaited nuclear triad has finally become operational. The first two legs of the triad, already in place with the armed forces, are the Agni series of missiles and fighters like Sukhoi-30MKIs and Mirage-2000s configured to deliver nuclear warheads. The absence of an operational SLBM, however, has for long left a “big credibility gap” in the country’s nuclear deterrence posture. Only a nuclear-powered submarine, which can stay underwater for extended periods, armed with nuclear-tipped missiles can provide a country with effective and difficult-to-detect “second or retaliatory strike capabilities”. But the development of both INS Arihant and K-15 has meandered for well over a decade now. India may now have the INS Chakra, the Akula-II class nuclear-propelled submarine leased from Russia for 10 years, but it did not come armed with “strategic” missiles due to international treaties. The utility of SSBNs (nuclear submarines with long range missiles) can be gauged from the fact that even the US and Russia are ensuring that two-thirds of the strategic warheads they eventually retain under arms reduction agreements will be in the shape of SLBMs. Consequently, INS Arihant and its three follow-on submarines in the process of being built, along with the K-15 and K-4 missiles, are considered critical for India’s “strategic deterrence and autonomy”. ( courtesy TOI)]]>