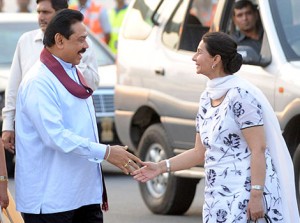 Days after some LankanÂ government allies hinted at pushing for the 13th Amendment to be abolished, India has said it wants Sri Lanka to fully implement the changes.

India reminded Sri Lanka during the Universal Periodic Review (UPR) in Geneva last week that the Sri Lankan government had in 2008 given a commitment to implement the 13th Amendment. â€œWe recall the commitments made by Sri Lanka to the international community during the UPR in 2008 and on subsequent occasions for the implementation of the 13th Amendment and building on it so as to achieve a meaningful devolution package.

We urge expeditious action to take forward the political process for an early political settlement,â€ the Indian delegation said.

The Jathika Hela Urumaya (JHU) led by Minister Champika Ranawaka and the Nation Freedom Front (NFF) led by Minister Wimal Weerawansa have begun a strong campaign against the 13th Amendment.

Both political parties are against India. The Indian delegation at the UPR meanwhile also called on Sri Lanka to hold early Provincial Council elections in the North.

While noting that Sri Lanka had given an undertaking that the elections will be held next year, the Indian delegation said that the people of the province should be able to exercise democratic rights as guaranteed to them in the Sri Lankan Constitution as early as feasible. India also called for early progress towards reconciliation, promotion of a trilingual policy, reduction of high security zones, return of private land by the military and phasing out of the involvement of the security forces in civilian activities in the Northern Province. â€œWe believe that early and visible progress in this regard will foster genuine reconciliation. We call for credible investigations to be conducted in respect of allegations of human rights violations and incidents involving loss of civilian life brought out in the LLRC report,â€ India has told Sri Lanka.