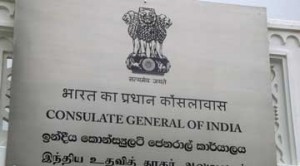 The house of an Indian Consulate official in Jaffna was ransacked on Friday, a day after miscreants stormed the Bank of Ceylon building in Chennai. Officials confirmed the attack and told the Indian media that a formal protest has been lodged. Ironically, Indian High Commission here lodged the protest soon after the Sri Lankan Demarche over the attack on the Bank of Ceylon.

The Jaffna Consulate officials are under the close watch of the Sri Lankan Armed Forces, and there have been instances of intimidation in the past.

In this instance, miscreants entered the house through a rear window of the house in broad daylight. The official was at the Consulate when his house was ransacked.

A video player and some money were taken away from the house. There appears to have been a thorough search of the premises, one official said. Even folded clothes and bed linen were taken apart and it appears that those who came were looking for something specific.

Jaffna, and the whole of the Northern Province, remains under the tight watch of the Sri Lankan Armed Forces. Though Army deployment is no longer very visible during the day in Jaffna, they patrol the area quite regularly.