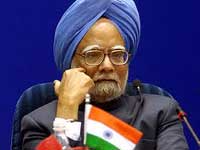 Salma Yusuf in candid conversation with Shri Rahpal Malhotra, the distinguished mover-and-shaker in Indiaâ€™s Prime Ministerâ€™s Office having advised former Indian leaders including Indhira Gandhi and Rajiv Gandhi. He is Executive Vice-Chairman of the Centre for Research in Rural and Industrial Development (CRRID) in Chandigarh, of which Prime Minister Manmohan Singh is Chairman. He currently provides suggestive advice to Prime Minister Manmohan Singh, both personally and institutionally.

Relationship with Prime Minister of India

RM: I share a close friendship with Prime Minister Manmohan Singh that dates back to our days in university together. We have known each other for 52 years both at a personal and professional level. Prime Minister Singh is Chairman of CRRID and Line Member of the Board of Governors of CRRID, taking special interest in programmes of the institutions that engage the field of cooperative development across countries in Central and South Asia. Such programmes greatly contribute to the bilateral relationships that India enjoys with its neighbours in the region. We are now embarking upon a similar programme with Sri Lanka as well. Prime Minister Singh is a well-read man, a deep thinker with inexhaustible and creative understanding who deliberates keenly before embarking on any policy course. However, what he can benefit from me and others in such a capacity is access to primary information based on data and ground realities which have not yet been reported. Hence I could say that the advice I offer the Prime Minister both individually and institutionally is â€˜suggestiveâ€™ in nature, which is in turn utilized by him in a manner that befits the nation. Suggestive advice to the Government of India

RM: As I mentioned, Prime Minister Singh and I met in 1960 where we studied together as young men at the university. Hence a relationship of trust and goodwill has been built over the years. Being a man of compassion and high stature does in no way mean that he patronizes his friends but rather heeds the public views and direction through persons like myself, whom he trusts. A similar example was also seen in the late Prime Minister Indira Gandhi, who sought opinion from a wide and varied interest group. The late Jawaharlal Nehru was no different. Having been closely associated with many Indian leaders, I can say without hesitation that they understand the limitations that come with being advised in an insular fashion by those within the Prime Ministerâ€™s Office or the Prime Ministerâ€™s House only. Therefore, most Indian leaders solicit the information, advice and opinion through parallel informal channels to examine and verify the credibility and relevance of national undertakings. Such has paid valuable dividends for India in the course of its history. Vested interests defy informal advice

Q: When you mention the need for informal and parallel channels of information and advice, do you think it useful that such channels be structured or better left â€˜amoebicâ€™ and evolutionary in nature and form?

RM: I would say that informal channels need not, and more importantly, must not be structured. For if a framework or structure is put in place for such processes, vested interests begin to develop immediately and would defy the entire purpose of the project. The practice of informal communication is not new in New Delhi and has been practiced from times of yore. A leader like Indira Gandhi would meet public representatives, parliamentarians, community leaders, the media and other national stakeholders from 9 am through 10 am every morning of the week except on Sundays. If there was an issue that was substantive and needed to be addressed she would follow up with persons involved and carry the process forward. Indian vote in favour of UN Human Rights Council Resolution on Sri Lanka

Q: There have been three main schools of thought regarding Indiaâ€™s vote in favour of the United Nations Human Rights Council resolution on Sri Lanka in March 2012: first, that it was a result of what has come to be called â€˜coalition compulsions;â€™ second, that it is as a result of pressure from the USA particularly against the backdrop of China and India competing to becoming a superpower in a potential Asian Century; and third, that it is because of so-called â€˜broken promisesâ€™ which New Delhi has taken to heart. Could you clarify for the Sri Lankan audience what the rationale was behind Indiaâ€™s vote in favour of a resolution on Sri Lanka in Geneva this year?

RM: Here again, I revert to the previous point I made in response to your question on governance. The power of information for governance and foreign policy decisions cannot be exaggerated. If India had been informed that efforts at reconciliation were underway in Sri Lanka, the result would most certainly have been an abstention in Geneva in March 2012. The government of Sri Lanka has made giant strides in the areas of reconstruction, rehabilitation and resettlement which undoubtedly contribute to reconciliation. If the information had been clearly communicated the Central government in New Delhi would have convinced its coalition in Tamil Nadu that progress was being sought in one way or another, despite the challenges and impediments that trouble the process of arriving at a permanent political settlement. The Tamil Nadu factor

Q: Does that mean that the people in Tamil Nadu were not necessarily in favour of the resolution on Sri Lanka?

RM:Prime Minister Singh had limited choice as the Dravida Munnettra Kazhagam (DMK)in the south of the country is a very important part of Indiaâ€™s coalition government. If the Prime Minister did not make the decision that he did, the current ruling government would have collapsed. It is in such a context that the decision to vote in favour of the United Nations Human Rights resolution in March 2012 must be viewed by Sri Lankans. Domestic pressure and what you rightly described as â€˜coalition compulsionsâ€™ were what led to the vote by India in favour of the United Nations Human Rights Council resolution on Sri Lanka, but it must be made clear that this in no way means that the government of India is against Sri Lanka. The disconnection between the government of India and its southern people

Q: Are you hinting at a probable disconnect between the government-of-the-day and the people they represent?

RM:That is exactly what I am trying to say and there is no better way to describe it than as a â€˜disconnectâ€™: There is an unfortunate disconnect currently between the people and government in India, and this was reflected in the decision to vote in favour of the United Nations Human Rights Council resolution on Sri Lanka. A connect remains within a region only and gets more complex with the sub â€“ regional political structure existing in the country. This is the very niche that persons like I and institutions I represent try to fill, as you will have realized that a change of party does not affect the relationship we have had with governments-of-the-day. The people of India feel very warmly and well towards the people of Sri Lanka whom they regard as brothers. It is such ground-reality that we try to convey to the Prime Minister of the day in any government that is in office, and this is an accurate illustration of what I mean by â€˜suggestive adviceâ€™ that must come through informal but credible and trusted channels. USA as a foreign policy partner

Q: A moment for the Indo â€“ US relationship: how important does India regard the USA as a foreign policy partner?

RM: Something less known is that Prime Minister Singh does not succumb to negative forces or undue pressure. While being empathetic, all decisions made in New Delhi are essentially India â€“ centric. It must be made clear that the interests of the country are always accorded prime status in any relationship we seek to cultivate or strengthen. Similarly, every country has to look at its own national interests in its foreign dealings. That is precisely what India does too, in all its dealings, be it with Sri Lanka, the United States or China. Something important with foreign policy is that if it is truly pro-people, no country or leader will be faulted or taken for a ride. For instance, Prime Minister Singh sees the importance of being able to speak with both the Presidents of Russia and USA at the same time; in fact both President Bush and President Putin held Prime Minister Singh in high regard. Similarly, you will see that despite Sri Lanka having strong relations with Pakistan, India has an independently rich relationship with Sri Lanka. The case of China is no different. Relationship between Prime Minister Singh and President Rajapaksa

Q: How would you describe the relationship between the two leaders of our countries?

RM: I must say that the relationship between Prime Minister Manmohan Singh and President Mahinda Rajapaksa is very sound and will weather the harsh impacts and fallouts post â€“ Geneva resolution, and other international pressures that are being peddled to breed discontent between our two great nations. The relationship between the two leaders is based on mutual understanding and this is reflected in the fact that a robust bi â€“ lateral relationship is continuing to be strengthened on various fronts including the, economic, defence and cultural. Relationship between the peoples of India and Sri Lanka

Q: How would you describe the relationship between the peoples of India and Sri Lanka?

RM: Contrary to common belief, southern Indians do not harbour animosity towards the majority of people in Sri Lanka. This is the information that did not reach New Delhi prior to the UN Human Rights Council resolution. It is the information that would in all likelihood have changed the Indian decision to vote in favour of the resolution. It is the information that would have resulted in an abstention at the very least. That is the power of information in governance and foreign policy. There are times when leaders of countries are helpless and it is conversations such as what you and I are having right now that need to reach all sections of society to spread the message, to clarify positions and set the record straight. It is both a service and a necessity. Indian foreign policy and Chinaâ€™s rise

Q: What is Indiaâ€™s current foreign policy regionally and internationally given Chinaâ€™s rise and power?

RM: India is in no way disturbed or affected by Chinaâ€™s relationship with Sri Lanka. Just as the Chinese have historic ties with Sri Lanka, so does India, with connections that date back to religion, culture, tradition, and politics. Some have gone further to propose that we even share common DNA with Sri Lankans. What Sri Lanka needs to do is to assess for itself in which aspects each country remains beneficial to its own interests. There is no absolutist answer to the question. Moreover, we have to also realize that foreign policy is not a stagnant force; rather it must be seen as a moving vehicle which must grow, change and adapt with the permutations and combinations existing at a given time. It is intellectual bankruptcy that results in insecure voices dominating the stage and making claims to the contrary. Indian foreign policy however is set in principle in relation to its relationships with its neighbours and members of the South Asian Association for Regional Cooperation (SAARC): it seeks to maintain the best of relationships with its neighbours in South Asia.