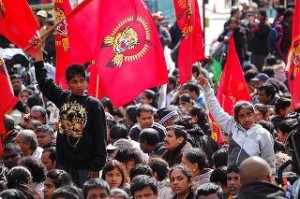 The GTF said that tougher action was needed to pressure the authoritarian government to fulfill its international obligations.

Responding to a query by The Colombo based Island, GTF spokesman Suren Surendiran said that the group appreciated a range of measures taken by Tamil Nadu Chief Minister Jayalalithaa as well as other political parties and civil society organizations to push the Sri Lankan government. Surendiran commended the role played by the Tamil Nadu student movement in propagating their cause.

Surendiran admitted that the decision taken by the Tamil Nadu State Assembly had caused some dissatisfaction among some sections.

The GTF would campaign relentlessly until CM Jayalalithaa offered Chennai as an alternative venue for the next Commonwealth Heads of Government Meeting (CHOGM) scheduled to be held in Sri Lanka later this year. When pointed out that India had rejected a resolution passed by the Tamil Nadu State Assembly against Sri Lanka, Surendiran said that the GTF would campaign until Indian Prime Minister Manmohan Singh announced his decision not to attend the CHOGM.

The resolution sought a separate Eelam for Sri Lankan Tamils and said Sri Lanka should not be treated as a friendly country by India.

Surendiran said that the international community couldnâ€™t ignore the combined force of Sri Lankaâ€™s Tamil Diaspora, the TNA and Tamil Nadu. The international opinion could be influenced through a sustained campaign, he said, indicating that the recent GTF/TNA initiative in South Africa, ahead of the United Nations Human Rights Council (UNHRC) sessions, highlighted the growing cooperation among various parties fighting for a common cause. High level TNA representation at the third anniversary celebrations of the GTF in the British parliament recently underscored the importance of their relationship, Surendiran said.

Surendiran asserted that most Asian and African countries in the Commonwealth could be influenced by India in the backdrop of the Queen and Prime Ministers of UK and Canada boycotting CHIGM 2013.

Surendiran alleged that the Rajapaksa brothers couldnâ€™t carry on as if nothing was wrong when many countries, including India, wanted an independent investigation into accountability issues.

India should step up pressure on Sri Lanka by imposing travel restrictions on Sri Lankan political, military and administrative officials. “The fact that India has voted in favour on these â€˜softâ€™ resolutions for the second year running gives India the opportunity and moral high ground to demand that the Government of Sri Lanka act accordingly,” Surendiran said.