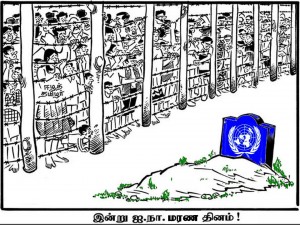 In 2008, Sri Lanka agreed to investigate and prosecute all allegations of extrajudicial, summary or arbitrary killings and bring the perpetrators to justice in accordance with international standards, as a means to ensure accountability for human rights violations. Could the Delegation of Sri Lanka inform us on the status of this process, responsible institutions, progress to-date, and benchmarks for completion of these investigations?

1. Repeal Sections 9 (1) and 15 (A) (1) of the Prevention of Terrorism Act to ensure that detainees are held only in recognized places of detention, with regularized procedures and safeguards to protect detainees including access to legal representation and systematic notification to families of detainee whereabouts.

2. Create a mechanism to ensure that all internally displaced persons, including 66,151 â€œOld IDPSâ€ and further 103,274 living with host communities, receive a written statement detailing their entitlements and plans for return to their original homes.

3. Expedite implementation of reconciliation measures in the North. This would include removing oversight of humanitarian and NGO activities from the purview of Ministry of Defence to a civilian body, reducing the intrusiveness of military presence on civilian life in the North and setting a specific date for free and fair Northern Provincial Council elections.

4. Decriminalize consenting homosexual relationships between persons over the age of consent by repealing Section 365A of the penal code.

We welcome steps taken by Government of Sri Lanka to implement the Human Rights Council Resolution of March 22, 2012. Facilitation of the September 2012 visit by the technical team of the Office for the High Commissioner for Human Rights was a significant development in this regard.

We continue to have serious concerns with respect to Sri Lankaâ€™s human rights situation. Reports of intimidation of journalists and others critical of government policy are particularly troubling. The government must guarantee freedom of expression of its citizens.

We are concerned that, more than three years after the end of the war, many of the underlying causes have not been adequately addressed. There is little evidence of progress towards establishment of political reconciliation involving devolution of power, as per the 13th Constitutional Amendment.