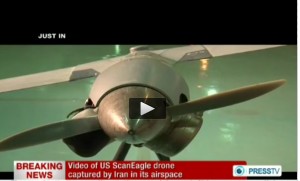 Iran’s Revolutionary Guards claimed on Tuesday it had “captured” a small US drone over Gulf waters after it entered Iranian airspace on an intelligence-gathering mission. “The unmanned US drone patrolling Persian Gulf waters, performing reconnaissance and gathering intel, was captured as soon as it entered Iranian airspace,” the elite unit’s naval forces said in a statement cited by state broadcaster IRIB. The statement did not say exactly when, where or how the aircraft was captured. It said the drone had been conducting a mission over “the past few days.” The Guards’ naval force, tasked with guarding Iranian assets in the Gulf, said the drone was a Boeing-made ScanEagle, a short-range surveillance vehicle with a three-metre wingspan that is typically launched from ships and which can fly up to 100 kilometres. Iran a year ago claimed to have captured a much bigger and sophisticated stealth drone, a bat-winged RQ-170 Sentinel. Tehran rejected a US request for its return and said it would reverse-engineer that drone to make its own. Iran is subject to US surveillance, notably over its controversial nuclear programme. Iran’s foreign ministry said last week the United States had violated Iranian airspace eight times in October, and warned of a “serious reaction” if such incursions continued. On November 1, Iranian fighter jets fired on a US drone in the Gulf but failed to bring it down, according to ths US Defence Department. The most recent drone claim adds to military tensions between the two arch-foes in the Gulf. Iran said the aircraft was on a reconnaissance mission near Bushehr, which hosts its only nuclear power plant, as well as its main oil terminal at Kharg island. It said the drone had entered Iranian airspace. (AFP)]]>